View source
watch 01:25
Jurassic World: Dominion Dominates Fandom Wikis - The Loop
Do you like this video?
Play Sound
This article is about the White Violin from the Dark Horse comics. You may be looking for Viktor Hargreeves from the Netflix series, or the Netflix series episode of the same name.

"You remind me of my father. Points off for you."
—Vanya Hargreeves to Deever[src]

Vanya Hargreeves, originally known as Number Seven, is one of the children that Sir Reginald Hargreeves adopted in order to "save the world". She is considered among her siblings to be the youngest one. Unlike her brothers and sister, Vanya apparently has no power and is a common girl that, according to her father, can barely play the violin. However, this was a lie fabricated by Hargreeves to keep her power in check, as, in reality she is the most powerful of them all. Upon learning the truth, Vanya went insane and took up the mantle of the White Violin to end the world with her abilities, but when she regained control became broken and devastated by what she had become.

The child that would become Vanya Hargreeves was born at the same time as forty-two other extraordinary children. As a baby, she was adopted by the world-famous scientist and entrepreneur Sir Reginald Hargreeves with the express intention of training them to save the world. Vanya lived at the special academy set up by Hargreeves to train the children. Designated as Number Seven by Hargreeves, Vanya seemingly displayed no special abilities, leading Sir Reginald to label her as "utterly useless." Vanya pursued a love of music, but was considered to have only a mediocre level of skill by her adopted father.[1]

Ten years after their adoption, the Umbrella Academy made their public debut to counter the threat posed by the Zombie-Robot Gustave Eiffel and the rampaging Eiffel Tower in Paris. Because of her lack of powers, Vanya did not join in the mission and watched it unfold aboard The Minerva with her father. She asked about the whereabouts of Number Five and was told by Sir Reginald that he was probably in the future. Sir Reginald told her to go and practice the violin.[1]

Vanya detailed her experiences in a tell-all autobiography entitled "Extra-Ordinary: My Life as Number Seven." The book contained a lot of negative things about her family.[1]

In her teenage years, she went through a rebellious phase. During this time she seemed to be very connected to the Kraken and both of them were in a punk-rock band called the Prime-8's. Still, Kraken continued as a member of the Academy. After he left the band due to a mission with the Academy, Vanya realized it just wasn't her place, leaving home without telling anyone.

In her apartment, Vanya took a telephone call from a mysterious individual telling her that Sir Reginald was dead. Vanya did not react to the news, and the caller offered her the chance at revenge by offering her an audition for his Orchestra Verdammten. He told her to be at the Icarus Theatre at noon the following day.[1] The following day, Vanya attended the theatre. Finding it dilapidated and in darkness, Vanya was asked to play anything by a hidden voice. Despite not playing the violin for twelve years, Vanya played until a string broke on her instrument. Applause from the darkness greeted her, and the lights went up to reveal a large group of people. Their leader introduced them as the Orchestra Verdammten, and himself as The Conductor. Telling Vanya that he had written a piece of music that could destroy the world known as The Apocalypse Suite, The Conductor needed Vanya to join him, believing that her father had been wrong about her and she had always had power inside her. Vanya walked out of the theatre and told The Conductor not to follow her.[2]

Vanya went to help her siblings with Doctor Terminal's robot attack, trying to tell them of the Orchestra Verdammten's threat, but was harshly rejected by Diego, who told her to "get lost." Leaving in tears, she returned to the Orchestra Verdammten and was prepared to end the world, believing she now had no one else left to turn to.[3]

The Conductor revealed that he had read Hargreeves's notes and discovered that she was the most dangerous Academy member of all, and that all this time her pills had really been killing her powers. Utilized to awake her inner powers and explained to her that he had read Hargreeves's notes and he discovered that she was in fact the most dangerous of her siblings. Hargreeves had experimented with her so that she could not use her powers to destroy the world. After that the director made her awake her powers. During a performance to show her abilities she killed the Conductor and went to the Academy. There she killed Pogo, destroyed Ben's statue, and burned the Academy.

Returning to the orchestra, the Apocalypse Suite began, with the Umbrella Academy appearing to stop her. During their confrontation she cut Rumor's neck before the Séance appeared pretending to be possessed by Hargreeves to stop her. She stopped playing and started arguing with him, saying that she was going to end the world and he called that a tantrum, which after she started crying. That's when Number Five shot her in the head and left her half-dead, but the apocalypse still continued, the final act being that of moon chunks hurtling right at them. Five responds to that by saying he never really liked her, but before they all perish, Séance proceeded to use his telekinesis to stop the meteorites. She was rushed to the hospital and saved just in time, but she developed amnesia and could not walk.[4]

Vanya is shown to be taken care of by her family. At one point Rumor shows her all that she did. Vanya watches, horrified at all that she had done.

At the end of Dallas, Rumor appears hugging her, having apparently forgiven her for what she did.

Vanya's powers are channeled through music. She is able to use incredible destructive forces by playing a note on her violin. These forces can be used for something as small as severing someone's vocal cords or blowing another's brains out the back of their head with the force of a shotgun, to bringing about the apocalypse and causing a massive piece of the moon to come crashing down. 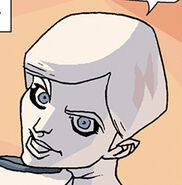 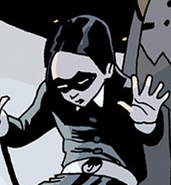