We Only See Each Other at Weddings and Funerals

"We Only See Each Other at Weddings and Funerals"

Created for Television By:
Steve Blackman
Based on the Dark Horse Comic By:
Gerard Way and Gabriel Bá
Teleplay By:
Jeremy Slater

Peter Hoar
"We Only See Each Other at Weddings and Funerals" is the first episode of the first season of The Umbrella Academy. It aired on Netflix on February 15, 2019.

Years after they rose to fame as young crime-fighting superheroes, the estranged Hargreeves siblings come together to mark their father's death.

SPOILERS AHEAD
On the twelfth hour of October 1, 1989, forty-three women give birth to forty-three children at the exact same time. The extraordinary thing about the births is that none of the women were pregnant when the day began. In Russia, a young woman flirts with a man at a swimming pool then jumps into the water. As she emerges, she is surrounded by blood and heavily pregnant, giving birth on the side of the pool moments later.

Enter Sir Reginald Hargreeves, billionaire inventor. He sets out to adopt as many of the children as possible. Sir Reginald manages to get seven of them.

Years later, the now-grown children live their own lives. Viktor plays a selection from Phantom of the Opera at a violin audition. Luther watches the Earth from his base on the moon. Diego saves a family from a home invasion. Allison attends the red carpet for a film premiere. Klaus is let out of rehab and immediately goes back to taking drugs. In their own way, each learns that Sir Reginald Hargreeves has died. The remaining members of the Hargreeves family converge on the Academy in the wake of their father's death. The reunion is fraught with tension. While Allison and Pogo are pleased to see Viktor, Diego is not since Viktor wrote a tell-all autobiography about his childhood. Luther suspects that one of the others killed their father; despite the coroner's report stating he died of a heart attack, Luther suspects foul play since Sir Reginald's monocle is missing. Luther asks Klaus to contact their father in the afterlife to find out the truth. Seventeen years ago, the Umbrella Academy make their first public appearance, stopping a robbery at the Capital West Bank. As the rest of the Academy deal with the thieves, Sir Reginald watches from above with Viktor. When Viktor asks why he is not joining his siblings, Sir Reginald tells him it is because he is not special. Once the Academy has successfully stopped the robbery, Sir Reginald introduces the world to the inaugural class of the Umbrella Academy, but only mentions that he adopted six children, rather than seven. At the Academy, Luther goes into his childhood room and puts on some music. As the music plays, each member of the Hargreeves family begins to dance in private, showing that although they are vastly different people, there is an underlying connection between them. The dancing is interrupted by a lightning storm. Heading into the courtyard, they watch as Number Five re-appears through a temporal anomaly. Number Five tells them about his trip to the future and his return, revealing he is really a 58-year man trapped in his 13-year old body. The Hargreeves, Pogo, and Grace hold a funeral for Sir Reginald in the Academy's courtyard. The proceedings are fraught, leading to Luther and Diego coming to blows. During the fight, Ben's memorial statue is destroyed and Diego cuts Luther's arm with a knife, causing him to hide the wound and leave. A flashback to seventeen years previously shows the members of the Academy training, and Sir Reginald monitoring their sleep. All of the children, except for Viktor, are given umbrella tattoos on their wrists. Viktor draws one on in pen on his own wrist.

With the funeral done, the Hargreeves begin to break up. Viktor leaves in a taxi after saying goodbye to Pogo, while Number Five goes in search of coffee. Diego leaves and Klaus hitches a ride, leaving Luther and Allison at the Academy. Grace, the children's robot "mother," recharges her systems.

Number Five ends up in Griddy's Doughnuts, where after asking a local tow truck driver for an address, he is confronted by a group of mercenaries. They want to take Number Five with them, but Five proceeds to kill them all. He realizes that they found him using a tracking device implanted in his arm, which he removes with a knife before dumping it into a puddle. At the river, Diego is revealed to have taken Sir Reginald's monocle and lets it drop into the river. In the car, Klaus talks with his deceased brother, Ben. Hearing the police report about the massacre at Griddy's, Diego heads off to investigate. Viktor arrives home to find Number Five waiting for him. As Viktor patches up Five's wound, Five tells him the truth about his time in the future; when he arrived he found the human race had been destroyed in an apocalypse. Five has no idea what caused it, only that it occurs in eight days' time.

This list is incomplete. You can help The Umbrella Academy Wiki by expanding it.

Changes from the Comics 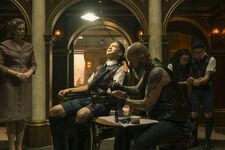 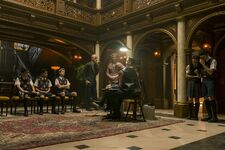 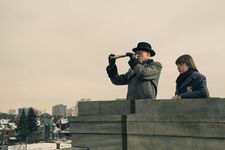 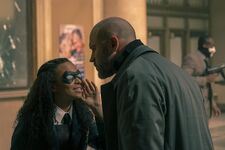 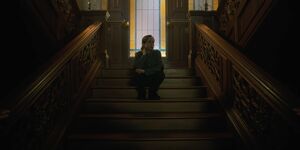 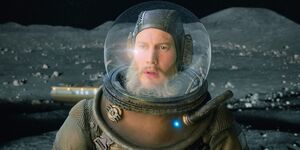 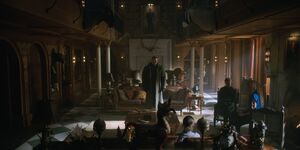 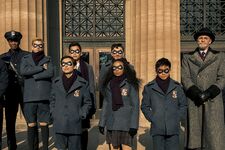 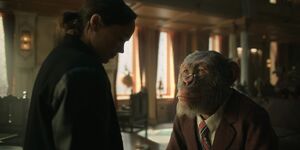 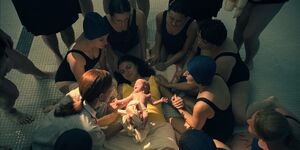