The Umbrella Academy was a group formed by Sir Reginald Hargreeves. It is comprised of seven of the babies born to forty-three women who gave birth simultaneously without explanation in 1989. The group frequently uses time travel to stop the impending apocalypse, and fights the time moderation organization known as the Temps Commission. Their last attempt to save humanity by altering the timeline resulted in the wiping of their formation and the creation of the Sparrow Academy.

43 children around the world are born by mysterious circumstances, as their mothers did not show any signs of pregnancy at all until labor began. 7 of these children are subsequently adopted by Sir Reginald Hargreeves, with the intention to raise them as a superhero team.

After an argument with his father, Five Hargreeves leaves The Umbrella Academy and time travels for the first time, jumping to April 1, 2019, the day of the apocalypse.

Ben Hargreeves is killed on a mission, but remains with his brother Klaus as a ghost.

Number Five makes a deal with The Handler to join the Commission and escape the apocalypse.

The apocalypse is brought on by Viktor Hargreeves and the entire human race is wiped out. Five Hargreeves arrives shortly after via time travel, and is stuck there for 45 years. 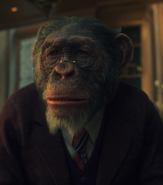 The Handler is one of the chief nemesies of the Umbrella Academy.

In Season 1, she was the leader of the Temps Commission, and was the same person who recruited an older Five to join the commission. When Five breaks the contract, she sends a pair of assassins - Cha Cha and Hazel - to convince Five to let the end occur. She is shot in the head by Hazel at the end of season 1, but survives.

In Season 2, she is demoted and loses her place at the head of the Commission. This time she goes out into the field with her adoptive daughter, Lila, to try and gain her power back. She uses Five to kill the board, bring her back Carmichael so she can rule again. She is killed by the remaining Swede assassin in the Cooper's barn.

One of the two temps assassins who seek out Five.

One of the two temps assassins who seek out Five.

Viktor’s fake boyfriend in Season 1. Although not a major threat compared to the others, he still acts as fuel to the flames of Viktor's fulfilment of the Apocalypse.

A trio of deadly sweedish assassins sent after the Umbrella Academy for changing the timeline.

Carmichael is introduced in season 2 as the new head of the Commission. Although not considered evil, he did still send The Swedes to hunt down the Umbrella Academy for changing the timeline. He is killed by the Handler.

The Double agent and adoptive daughter of The Handler, she is betrayed by her own adoptive parent and runs off.