The City (Original timeline)
The Umbrella Academy is a group of superpowered individuals formed by Sir Reginald Hargreeves. The team is composed of seven of the forty-three children born simultaneously without explanation in 1950.

"Tusslin' Tom" Gurney wrestles a Space-squid from Rigel X-9, taking it out with a move known as the "atomic flying elbow."

Forty-three babies are born simultaneously with no explanation or previous pregnancy from their mothers.Sir Reginald Hargreeves travels across the world trying to find these babies, locating and adopting seven of them. He holds a press conference about it and then vanishes from the world to train the babies in secret, discovering that all have great abilities that can be used to face great threats. Not one has a similar power, with one having superhuman strength, another able to manipulate objects in flight, another able to manipulate reality by lying, one with the ability to channel the dead and move objects with his mind, one able to time-travel, another with tentacles that emerge from his stomach, and one with destructive capabilities channeled through playing music. Hargreeves gives them numbers to keep track of them (Number One, Number Two, etc) and begins training them to become the greatest superheroes the world had ever seen, under the name of Umbrella Academy.

Hargreeves discovers that Number Seven's abilities are far too powerful and dangerous to be controlled. He begins to lie to her that she has no powers and feeding her depressants to dim her powers

During the Academy's training, Number Five insists on being to travel far into the future, which Hargreeves refuses, telling him he could never return, as backwards time travel is impossible. Bitter at this, Five traveled twenty years into the future and does not return, just as Hargreeves predicted. Later that same day, the Academy fights the Eiffel Tower, which has activated now that Gustave Eiffel's work on it is completed. The Tower rockets into space, leaving Paris and Earth alone.

The Academy become world famous and well-renowned superheroes, even gaining the respect of the United States Government.

John F. Kennedy is elected president of the United States of America.

An assassination attempt on President Kennedy's life is thwarted by a killer from the future.

An unknown force caused the Abraham Lincoln statue located in the Lincoln Memorial to come to life and begin attacking Washington, D.C.. The Umbrella Academy fought it off, with Number Three using her powers of reality manipulation to create a giant statue of John Wilkes Booth, who killed the real Abraham Lincoln. The Booth statue shot the Lincoln statue and then ran away, with police officers hot on his tail.

At the same time as the statue disaster was happening, President Kennedy met with the Monocle about an impending missile crisis. Kennedy gives Hargreeves the detonator to the entire country's nuclear arsenal and trusts him to use it if need be.

Hargreeves constructs a massive prison for all the villains the Academy has captured over the years, an offworld facility known as Hotel Oblivion and managed by a being known only as the Scientific Man.

Dr. Terminal becomes a supervillain, always searching for food to power his harness, which stops a disease he has called Einstein Syndrome from ending his life.

The Academy fight Dr. Terminal for the first time, and he kidnaps Allison and cuts off her left arm to ingest to continue slowing his Einsteinien Syndrome. Luther defeats Terminal, and he is sent to Hotel Oblivion, but leaves behind a set of robots called the Terminauts, knowing the Academy will eventually split up and reform again, programming them to attack the City on this reunion. Allison's arm is replaced by a robotic one, outwardly indistinguishable from the original.

Luther becomes the youngest person ever to go to space when he takes a trip to Mars with Phinneus Pogo, an assistant of Hargreeves. While there, the two encounter Martian Apes, and while Luther manages to kill one of them, he is so badly injured by them that Hargreeves is forced to graft his head onto the body of the deceased Ape, which Hargreeves cybernetically enhanced. This adventure earns Luther the nickname "Spaceboy", which he then adopts for future missions.

Kraken, and Vanya secretly form a rock band known as the Prime 8's with their friend Body.

Hargreeves finds out about the band and shuts it down, sending Vanya to a private music school and putting Diego on double duty.

Rumor lies about going to the library, accidentally creating another version of herself that was at the library. The Murder Magician finds this other Rumor and kills her, and soon after the Academy take down him and his assistant. Hargreeves is revealed to have engineered the whole thing to teach Allison a lesson, and the Murder Magician is sent to Hotel Oblivion.

Ben dies out on a mission. The circumstances are very unclear, even to the other Academy members.

The Kraken develops a close working relationship with Inspector Lupo and Body, who is now a cop.

Hargreeves sends Luther to the Moon, where a base is constructed for him to better protect the world from threats. While there, Luther constructs a robot called Ben to help him do tasks and keep him company.

Hargreeves dies of a heart attack.

Allison, Luther, Diego, and Klaus, return home to mourn him. The Terminauts reactivate and start causing chaos in the City, causing the reunited Academy to face them. There they meet up with Vanya, who tries telling them of the plans of the Orchestra Verdammten, who tried to convince Vanya to use the powers Hargreeves told her she didn't have to end the world. Her siblings refuse to listen, and Vanya returns to the Orchestra, insisting they let her help them end the world. They unlock her powers with Hargreeves' notes, transforming her into the White Violin. Vanya and the Orchestra perform a piece written by their leader, the Conductor, known as the Apocalypse Suite. The piece shatters the Moon, causing pieces of it to land all over Earth and wipe out all life.

From 1960, long-lost Number Five arrives in the City, just a few days after the world ends, and begins to take advantage of his free reign in the smoldering wasteland, before realizing just how bad this was, and that he must return to 1960, the day the Eiffel Tower went berserk, and prevent this from ever happening.

After 50 years alone in the apocalyptic wasteland, Five finally calculates the formula for backwards time travel, and attempts to travel back to 1960. 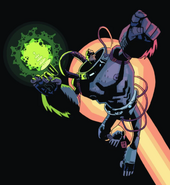 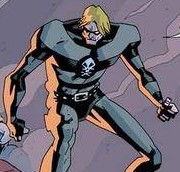 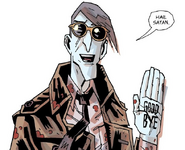 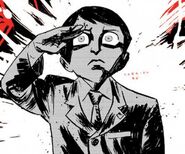 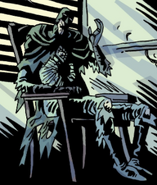 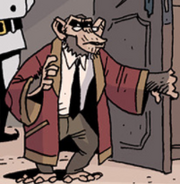