Steve Surjik
"The Frankel Footage"[1] is the second episode in the second season of The Umbrella Academy, and the twelfth overall.

An incident at the bar leads Luther to Vanya. Five finds an unsettling surprise in the film Hazel left behind. The cops come after Allison's husband.

A flashback to shortly after the Handler was shot by Hazel shows the Handler being wheeled to the furnace ready for burning. She suddenly wakes, however, and shrieks that the workers get her to the hospital. Three months later, the Handler returns to the Temps Commission to find she no longer occupies the position she formerly held. Entering her office, she is told by A.J. that she has been demoted; she tries to reason with A.J. about Hazel and Cha-Cha’s mistakes, but he is unwilling to listen. The Handler is horrified to be told that Herb is her new supervisor.

Back in the club, Five tries to do more to convince Luther of the impending apocalypse. He is unwilling to listen, and remarks that he already has a job in the club his boss, Ruby, owns. Luther remarks that he has moved on and that there is no more, “Number One” — the Umbrella Academy no longer needs him, and it never did. Luther has to end the conversation to deal with someone harassing Mr. Ruby, and Five sarcastically remarks that he should’ve been left on the moon. Just as he is about to leave the club, Five notices something in his pocket put there by Hazel, a box labeled “The Frankel Footage”.

Vanya is sitting at the table reading through the various advertisements put into the newspaper by Carl. Sissy enters moments later in a hurry and reveals that she is off to pick up Carl from the bar and bring him home. She is distracted, however, by Harlan who insists she read him a bedtime story. She reluctantly agrees when Vanya agrees to collect Carl on her behalf; Sissy jokes that she wishes she ran her over years earlier.

Meanwhile, Diego and Lila are desperately trying to evade the authorities and the hitmen who shot at them. Diego tells Lila that they should go their separate ways given the authorities will be looking for the pair of them. Lila is able to convince him otherwise, however, and the two of them steal a car together.

Vanya arrives to collect Carl and the two talk about the relationship between Carl and Sissy. Vanya assures Carl that Sissy still loves him despite how mad she may be at the current moment in time. Just as she is about to leave, Luther exits the club and catches a glimpse of her. The two stare at one another, but Vanya is unable to recognize Luther and, much to his surprise, drives away as he utters her name.

Raymond and Allison are enjoying their night together at home when they are startled by two police officers forcing their way through the door. They arrest Raymond for assault and battery at the hair salon despite the two pleading that it was self defense. Allison begins to use her abilities to influence one of the officers, but Raymond tells her not to and assures her that he will be alright. She breaks down crying as he is taken into custody.

Five takes the footage to Elliott and asks him to develop it. Elliott agrees, but cites that it could take up to five hours for the footage to develop. The conversation is interrupted by the police scanner which reveals that there are twenty-five fugitives on the run. Five realises that Diego succeeded in his escape attempt and could well be on the run and in need of saving.

Diego and Lila wait for Oswald to finish his shift and formulate a plan of attack. They plan to force Oswald to leave Dallas, but Lila suggests that they kill Oswald before he is able to kill the president. Diego is horrified by the suggestion, preaching that he will not kill someone before they have even committed a crime. The two begin arguing, but are interrupted by Five who travels to the back seat and gives Diego and Lila an ultimatum: go with him or be turned in to the police. Diego agrees, citing that Five isn’t bluffing and would really turn them in.

Allison tries to talk with Raymond, but is turned away by the clerk at the police station, who cites that only his lawyer is able to speak with him. Moments later, Keechie is brought in for handing out flyers without a permit. As he is thrown into a cell, he is astounded that he has finally met Klaus, citing that he saw him speak in 1961. In an attempt to escape Keechie, Klaus moves seat and finds himself in conversation with Raymond about Shakespeare. Their conversation is cut short when Klaus is released on order by the governor.

Five takes Lila and Diego back to Elliott’s shop, where they’re confronted by him as he questions where they got the footage. Five is able to disarm Elliott and they all watch the footage together. The footage shows the assassination of JFK, but Diego and Five are drawn to a more stark detail: their father, Sir Reginald Hargreeves standing in the distance under the symbolic umbrella of the academy. Both are reluctant to believe what is staring them in the face, but are forced to accept that their father was present during the assassination.

Vanya and Harlan begin playing a game of hide-and-seek before dinner, but are unknowingly watched from a distance by Luther, who wishes to exact revenge for Vanya’s actions and the part she played in the death of Pogo. Approaching Vanya, Luther is startled to find that she cannot remember him, all the while she is ecstatic that someone is finally able to identify her. Luther initially doesn’t believe that she is unable to recall any of her memories, but eventually tells her that he doesn’t care, and understands if she is hiding out. He apologises to her for letting her down, but is forced to leave when Sissy arrives demanding to know what business he has on the ranch.

Meanwhile, the Swedes receive a new message from the Temps Commission. Inside, they find a photograph of Vanya and, presumably, a bounty on her head.

Back at Elliott’s place, Five and Diego argue over their father’s participation in the assassination of JFK; Diego believes Reginald to be involved, wheras Five is reluctant to believe so. They agree to track down Reginald and ask him about averting the apocalypse and the assassination. Meanwhile, Diego talks with Lila, who is in the midst of a mental breakdown brought on by her belief that she is seeing things related to the assassination — an event she believes she herself has conjured. Diego assures her she is not crazy.

Allison talks with Raymond in his cell about the upcoming sit-in and what will happen if he is unable to make it. She assures him, however, that everything will be fine and he will get out. Raymond becomes inquisitive and questions why Allison said “I heard a rumour” the night of his arrest, but their conversation is cut short by the police who tell her the time is up; she promises to explain later. On her way out of the cell block, she notices a man with the same distinct hand tattoos as Klaus, and is told that all of the “Prophet’s Children” have them.

Vanya and Sissy talk about the encounter between Vanya and Luther previously, with Vanya becoming increasingly annoyed that she cannot recall anything. There appears to be an intimate moment between the two before Sissy leaves for bed. Vanya is unable to sleep calmly, however, and flashes of memories begin flooding back to her. She leaves the house after this, taking Sissy’s car with her.

Five and Diego arrive at D.S Manufacturing, their father’s umbrella manufacturing plant. They split up for more effective searching, but Diego is led astray by a mysterious figure leaving the building. Five, meanwhile, finds a younger Pogo who scratches him viciously and jumps out of the building’s window. After a brief fight between Diego and Reginald, Diego is stabbed by the latter who leaves him bleeding out on the floor of an abandoned warehouse. 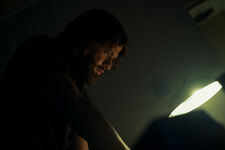 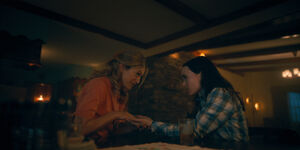