The Day That Wasn't

"The Day That Wasn't"

Created for Television By:
Steve Blackman
Developed By:
Jeremy Slater
Based on the Dark Horse Comic By:
Gerard Way and Gabriel Bá
Teleplay By:
Sneha Koorse

Stephen Surjik
"The Day That Wasn't" is the sixth episode of The Umbrella Academy. It aired on Netflix on February 15, 2019.

Sparks fly when Vanya finds her siblings holding an emergency family meeting without her. Five starts his new job at HQ. Cha-Cha faces a dilemma.

Klaus arrives in the A Shau Valley in 1968 in the middle of the Vietnam War. Klaus is pressed into service, given a weapon and bussed to the front lines. On the bus, Klaus hides the briefcase and meets a soldier named Dave.

Back in the present, Luther Hargreeves fills Diego, Allison, and Klaus in on everything Five told him about the coming apocalypse. They also find out that they all die in the disaster.

Hazel and Cha Cha head to another motel and receive a message from the Temps Commission cancelling the contract on Number Five and to await further instructions. They have a slight argument about their situation and Hazel heads out to the vending machine. When he leaves, Cha Cha receives a message from the Commission telling her to terminate Hazel.

In 1955, The Handler introduces Five to his new role as a case manager with the Commission. Five is introduced to Dot, the case manager for the apocalypse. The Handler gives Five his first case – to ensure the destruction of the Hindenburg.

Vanya is convinced by Leonard to invite her family to her first concert as first chair. As they arrive, they find the rest of the family talking about the apocalypse. Vanya is surprised that they are having a family meeting and gets upset. Allison tries to tell her they will talk when they are alone, but Vanya tells them she always thought she was left out because of their father, but it turns out her siblings are the assholes. Vanya storms out; Leonard forgets his coat and goes back but uses the opportunity to steal a figure of Sir Reginald from a display.

The rest of the Hargreeves try to figure out their next move. Luther believes that his mission to the moon might be part of the answer, and decides to try and find all the research and samples that he sent Sir Reginald over four years. However, the rest of the Academy does not feel the same. With the apocalypse coming, Diego wants to avenge Patch, Klaus is still recovering from his time in the past, and Allison wants to get back to her daughter before the end of the world.

Outside, Vanya rages about her family to Leonard. As she walks down the street, streetlamps begin to warp and cars are damaged. To top it off, it begins to rain. Leonard believes that Vanya was responsible and has powers. Vanya tells him that it is impossible.

Klaus seeks out Diego and asks him to tie him up. He wants to get sober and needs to have his options taken away from him due to his weakness.

Five works on his assigned task, and tries to send an order to a field agent using the pneumatic tube system. The Handler catches him and tells him that Gloria is responsible for sending the orders out. The Handler looks at the order and finds that Five has completed his task. She compliments Five in front of the other case managers. As they break for lunch, Five steals the case file about the apocalypse from Dot's desk. Five tries to read it in the toilet but is interrupted by The Handler inviting him to lunch.

Cha Cha drives Hazel out in the woods, telling him that the Commission told her the briefcase was located out there. Hazel asks her if it would be so bad if they didn't find the briefcase and admits to being tired of the life they lead. Cha Cha aims a gun at Hazel. However, she does not kill him, and they drive back to the motel. Hazel offers to go get Chinese food and drives off.

Luther searches for the moon research. Pogo shows him where they are, hidden under the floorboards. Luther realizes that all the reports and samples he sent Sir Reginald have never been opened. Distraught, Luther believes that his father sent him away to the moon because he was not good enough.

In a flashback, Luther and Allison sneak out of their rooms at night and meet in a secluded section of the Academy. They have snacks, and Luther gives Allison a locket with A+L inscribed on it. Allison asks Luther to dance with her, but they are caught by Sir Reginald who forbids them from ever coming to the room again.

Diego secures Klaus to a chair and they talk about Klaus' reason for getting sober. Klaus tells him about his experiences in the Vietnam War and how he met the love of his life, Dave. They bond more as brothers, then Klaus tells Diego he has to pee.

Leonard tries to convince Vanya she has powers, but Vanya flatly refuses to believe it. At the Commission, Five and The Handler talk over lunch, where she shows off a new suit for him once his body is restored. He also admires The Handler's collection of weapons. Five brings up changes to protocol, wondering why Gloria is needed to send the messages. Dot arrives and wants to speak to The Handler in private. Five pockets a handful of sweets from The Handler's desk and leaves.

Allison finds Luther brooding over his discovery. She is waiting for a flight to LA and to cheer him up, they head back to the room where they almost danced so many years ago. They talk and end up heading out into the real world. At Griddy's, Cha Cha has followed Hazel and watches as he hugs and kisses Agnes outside the rear of the building.

Diego ties Klaus back up, although Klaus tries to get a final hit in. Diego won't let him, even when Klaus promises to conjure Patch for him. As Diego leaves him alone, Klaus remembers the battle when Dave was killed, with Klaus holding him and calling for a medic. Diego heads out, and see Grace walking around, unaware that Pogo had fixed her. Questioning her, wondering if she remembered who shut her off, Grace tells Diego that she remembers nothing before a week ago. She mentions it would be a nice day for a walk in the park. When Diego mentions his father never let her off the grounds, Grace reminds him that Sir Reginald is not here.

Luther and Allison spend time together in a park and it becomes clear they both have feelings for the other. Despite that, Allison has to catch her flight. Luther asks her to dance, and then they kiss for the first time. Allison tells him that if they hurry, they can make the flight together.

At the Commission, Dot gives a message to Gloria to send to Hazel and Cha Cha since she knows that Five is up to something. Five intercepts the message, which orders the pair to protect Harold Jenkins. Five sends orders to Hazel and Cha Cha separately telling them to eliminate the other. The Handler tries to stop Five, starting a gun battle in the tube room.

Diego and Grace walk through the park. She turns to Diego and tells him that she and Pogo have been lying to all of them.

Five and The Handler continue to fight; Five uses a grenade to destroy the tube room and seemingly kills the Handler.

At Leonard's, Vanya finds Sir Reginald's journal under his bed. She reads several entries about her confirming that Vanya does have powers but Sir Reginald covered them up and kept her controlled with medication.

At the Academy, Klaus sobers up and finally is able to contact Dave.

Five grabs a briefcase and uses a grenade to destroy all the remaining briefcases in storage. Five time travels to earlier in the day, to just after Vanya confronted her family for having a meeting without her. The day rewinds as the arrival of Five changes the way the day will go. Five tells them that they have a chance to stop the apocalypse since he now knows who is responsible – Harold Jenkins. 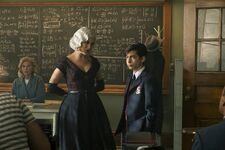 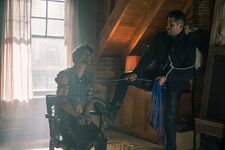 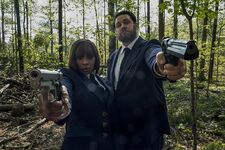 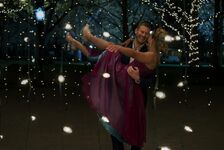 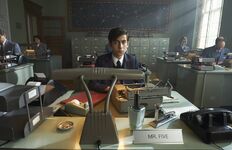 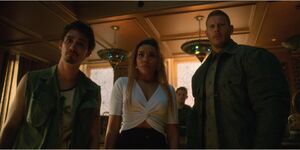 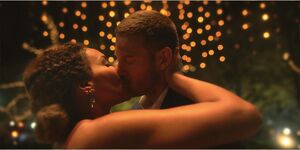 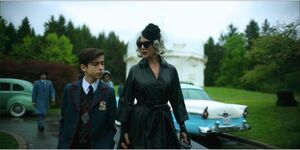 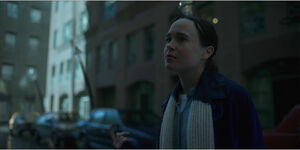