"The Day That Was"

Stephen Surjik
"The Day That Was" is the seventh episode of The Umbrella Academy. It aired on Netflix on February 15, 2019.

With a second chance at the day, the siblings team up to find the mysterious "Harold Jenkins." Leonard takes Vanya into the woods to test her powers.

On the seventh hour of October 1, 1989, Harold Jenkins is born. Despite being born on the same day as the extraordinary births of forty-three other babies, Harold is completely normal, as the result of a normal birth. Unfortunately, his mother dies in childbirth. Harold's childhood is not a happy one as his father constantly beats him.

At the age of thirteen, knowing that he was born on the same day as the members of the Umbrella Academy, he tries to join the Academy. He makes his own uniform and jumps the barrier outside the Academy when the team returns from a mission. He pleads with Sir Reginald to let him in, believing that he is the same as them and they can figure out his power together. Sir Reginald tells him in no uncertain terms that he is ordinary and throws him off the property. When Harold returns home, his father hits him again because of what he is wearing. In a rage, Harold kills his father with a hammer. Sentenced to twelve years, Harold grows up and it is revealed that he is Leonard Peabody.

On the day the Academy gathers for Sir Reginald's funeral, he watches Klaus Hargreeves throw Sir Reginald's journal into the dumpster and retrieves it, learning about Vanya's potential.

In the present, Five tells the other Hargreeves about Harold Jenkins. Leonard, in the process of stealing the Sir Reginald figure, overhears Five talking and realizes that his plan is in danger. Outside, much like the original timeline, Vanya rages about her family to Leonard and bends the street lights and damages the cars.

In the Academy, Five briefs the rest of the Academy on what is going on. Hazel and Cha Cha have been charged with protecting Harold Jenkins. Despite the incredulity of the situation, they agree to band together with the full force of the Academy to try and save the world. Five, Diego, and Allison Hargreeves go looking for information on Jenkins, while Luther Hargreeves believes that the answer might lie in the reason why Sir Reginald sent him to the Moon and goes looking for the research.

Like the original timeline, Hazel and Cha Cha receive the order that the termination order on Number Five was cancelled. Hazel goes to the vending machine and receives the order to terminate Cha Cha.

Diego calls Chuck Beaman, believing that Harold Jenkins has to have a criminal record. Beaman tells him that the police are looking at him for Patch's murder since his prints were at the scene and they were known to have a contentious past. Beaman doesn't believe that Diego was responsible. While they wait for Diego, Allison makes a phone call to Vanya, leaving a message on her answering machine apologizing for the way they treated her and telling her she loves her. Diego arrives with the file and Allison realizes that Jenkins is actually Leonard and that Vanya might be in danger.

As before, Luther discovers that Sir Reginald never looked at the information he sent. Without Allison's support, Luther begins drinking. Klaus arrives, wanting to be tied up to get sober. Luther and Klaus talk, and Luther tells Klaus he wants to be more carefree like him. He gave up everything – a life, friends – for Sir Reginald and now it means nothing. When Klaus tries to dissuade him from that kind of lifestyle, Luther storms out.

Cha Cha again drives Hazel out to the woods on the pretence of finding the briefcase. Hazel, aware of his orders doesn't want to kill Cha Cha and tries to convince her that they should be free to do what they want. Like before, Cha Cha cannot fire, especially when it sounds like Hazel is talking about a simple life between the two of them as more than partners. They drive back and Hazel goes off for food.

Diego, Allison, and Five break into Leonard's home. In the attic, they find pictures of the Academy with the eyes scratched out and action figures with the heads melted. Leonard and Vanya are not present, but then Five passes out. He has been hiding a stomach injury from his fight with The Handler because they were close.

Leonard and Vanya arrive at an isolated cabin in the woods near a lake. Having overhead Five, Leonard decided to take Vanya out of town to keep her isolated.

Hazel meets with Agnes and asks her to run away with him because he wants something more out of life. Agnes asks how Cha Cha is taking it and Hazel admits he hasn't told her about it. Agnes tells him to tell her because it would not be right to just disappear. Agnes agrees to go with Hazel and he drives back to the motel, unaware that Cha Cha is watching him.

Klaus, accompanied by Ben's spirit, go looking for Luther. Klaus believes that Luther needs something to take the edge off and experience life, but Ben argues that he's not ready for it. He points out that if the situation was reversed, Klaus knows that Luther would stop at nothing to save him.

At the Academy, Diego and Allison try to treat Five's wound. Diego is surprised to find Grace active after Pogo fixed her. Grace patches up Five.

Klaus continues to search for Luther, finally finding him at a rave, drunk and taking drugs. He tries to get Luther to stop, even throwing away a tablet, but the location threatens to overwhelm him. Ben tries to get him to stay strong but the temptation overwhelms him and he begins to crawl along the floor towards the tablet. As he does, he has flashbacks to his time in Vietnam and when he reaches the tablet, he sees Dave instead and once more cradles his dying body in his arms.

Allison desperately tries to contact Vanya with no success. With Five out of commission, Diego and Allison decide to go to Jenkins' grandmother's house. As the leave the Academy, Diego notices police cars. Realizing they are there for him, he sends Allison away to find Vanya and is arrested for Patch's murder.

In the country, Leonard tries to get Vanya to use her powers moving a boat on the water. She feels ridiculous even trying. They decide to go for dinner in town.

At the motel, Hazel arrives to find no Cha Cha. Trying to write a note to explain what he is doing, he finds the burnt remnant of a Commission order in the trash and realizes that they were both given the same order to terminate the other. As Cha Cha returns, Hazel pretends to be in the shower and hides. Cha Cha enters the room, goes to the bathroom and fires several times. When she realizes she has been tricked, Hazel knocks her out from behind.

While trying to help Luther, Klaus has a near-death experience. He meets a little girl on a bike who might be God, who directs him a place where someone is waiting to see him. Klaus believes it is Dave, but it is actually Sir Reginald. His father admonishes him for not contacting him sooner. Sir Reginald tells them that they were meant to save the world and he knew that they had to come together in time so he arranged to commit suicide to bring them back as a team. He also tells Klaus that he was probably the greatest disappointment, having only barely scratched the surface of what his powers can do. As he tries to tell Klaus something important, Klaus is pulled back to the land of the living. Luther is gone, the bouncers having kicked him out of the club.

At the small restaurant, Vanya and Leonard finish dinner. In the parking lot, three drunk men are clustered around their vehicle and refuse to leave. Leonard tries to stand up to them but is beaten up. Vanya tries to help and ends up triggering her power, sending the three men flying.

Cha Cha is handcuffed in the motel and Hazel apologizes, telling her that he knew he had to get out of the life once the order to kill her arrived. Cha Cha is angry that he is giving up on their life for a woman and promises to kill him and Agnes. Hazel cannot bring himself to kill Cha Cha and leaves.

At the hospital, Vanya watches over an injured Leonard who is now missing an eye. 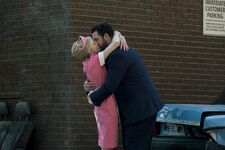 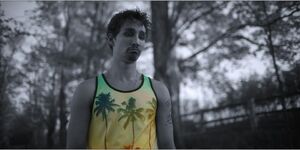 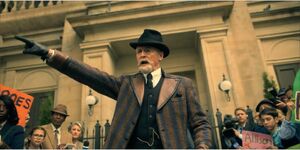 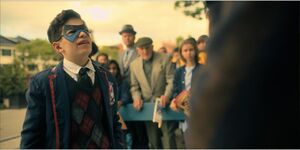 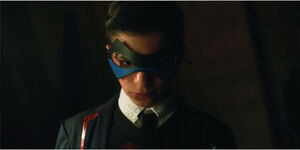 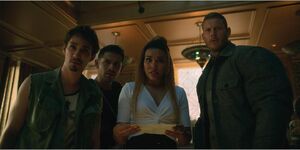 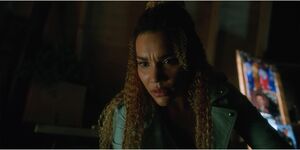 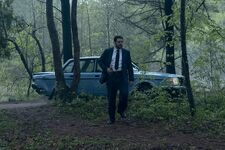 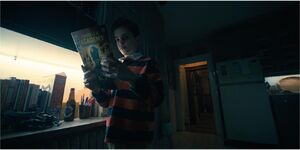 Retrieved from "https://umbrellaacademy.fandom.com/wiki/The_Day_That_Was?oldid=12678"
Community content is available under CC-BY-SA unless otherwise noted.