View source
watch 01:25
Jurassic World: Dominion Dominates Fandom Wikis - The Loop
Do you like this video?
Play Sound
This article is about Spaceboy from the Dark Horse comics. You may be looking for Luther Hargreeves from the Netflix series.

"We put our lives on the line for them... our lives aren't worth more than theirs."
—Spaceboy[src]

Luther Hargreeves, originally known as Number One and best known as Spaceboy, is the leader of the Umbrella Academy and twin brother to Number Five. He is codenamed Spaceboy due to his accomplishment of being the youngest person ever to become an astronaut. It is unsure as to whether Luther's codename was chosen by himself, Hargreeves or the media, as a poster of "Spaceboy – The first boy in space" is shown in The Umbrella Academy: Apocalypse Suite.

Spaceboy was involved in a disastrous mission to Mars. His head was attached to the body of a Martian Ape, giving him all the physical abilities of one, when Hargreeves performed a life saving surgery on him.

In Apocalypse Suite it becomes clear Spaceboy has romantic feelings for Rumor. They kiss once, but after this Spaceboy thinks he is too monstrous for her to ever love him back and have a decent relationship.

The child that would become Luther Hargreeves was born at the same time as forty-two other extraordinary children. As a baby, he was adopted by the world-famous scientist and entrepreneur Sir Reginald Hargreeves with the express intention of training them to save the world. Luther lived at the special academy set up by Hargreeves to train the children. Designated as Number One by Hargreeves, Luther displayed enhanced physical strength and resilience. His dedication to succeed led him to excel at anything he put his mind to, particularly flying and shooting. Possessed of a ruthless leadership style, Luther became Sir Reginald's favorite among the children and the leader of The Umbrella Academy team.[1]

Ten years after their adoption, the Umbrella Academy made their public debut to counter the threat posed by the Zombie-Robot Gustave Eiffel and the rampaging Eiffel Tower in Paris. Luther led the team into battle which ended with the death of Eiffel and the launching of the Eiffel Tower into space. After the mission, while having celebratory ice cream, Luther expressed his desire to go into space. Sir Reginald promised him that it would happen.[1]

Luther became the first boy in space, aided by his co-pilot Phinneus Pogo. His achievement led to him becoming known as "Spaceboy." During a further mission to the planet Mars, Spaceboy was critically injured. Sir Reginald was forced to perform emergency experimental surgery to save his life by transplanting his head onto the body of a Martian Gorilla.[1]

Shortly after the death of Ben Hargreeves, the Umbrella Academy disbanded and Spaceboy left Earth to take up residence on the Moon.[1]

Alongside his robot assistant, Ben, Spaceboy kept watch for intergalactic threats from Annihilation Control. Twenty years after the first public appearance of the Umbrella Academy, a phone call from Pogo recalled Luther from the Moon due to the death of Sir Reginald. Returning to the Academy, Luther found that Number Five had returned from the future.[1]

Spaceboy has super-strength, heightened by his gorilla body. His life-support system is also a jet-pack, and he is good with a laser-pistol. 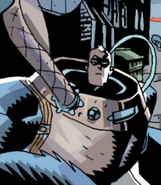