Season Three of Netflix's The Umbrella Academy was confirmed on November 10, 2020.[1] It began production in February 2021,[2] and ended in August that same year.[3]

The season, was released on June 22, 2022[4], will explore and explain the mystery of the Sparrow Academy, Hotel Oblivion, and the upcoming Kugelblitz caused by The Umbrella Academy that will swallow all of time and reality. 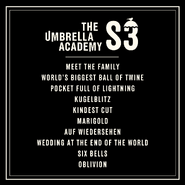