Andrew Bernstein
"Run Boy Run" is the second episode of the first season of The Umbrella Academy. It aired on Netflix on February 15, 2019.

After sharing the story of his time travel with Vanya, Five hunts for the owner of a fake eye. But two mysterious assassins are hot on his trail.

SPOILERS AHEAD
Sixteen years ago, the Hargreeves family sits down for dinner while a recorded lecture plays in the background. Number Five interrupts the meal, telling Sir Reginald Hargreeves that he is ready to attempt time travel after practicing his spatial jumps. Sir Reginald tells him that he is not ready and explains the fundamental difference between spatial jumps and time travel. When Five admits to not understanding, Sir Reginald tells him that is the reason that he should not try it. Believing he knows better, Five runs from the Academy and begins time traveling as he runs down the street. In a matter of seconds, he goes through several time periods until he finally arrives in a future devastated by the apocalypse. Returning to the site of the Academy to find it in ruins, Five tries to time travel home, only to find that he cannot. Back in the present, Number Five explains how he survived in the future to Vanya. Vanya is concerned that the time travel is messing with his mind like their father warned him could happen. Five tries to leave the apartment because he doesn't think that Vanya can understand or comprehend what he's going through. Vanya, not wanting to lose him so soon after his return, tells him to stay the night and that they'll try talking again in the morning. After Vanya goes into her room, Five leaves her apartment without a word.

Hazel and Cha Cha arrive at a motel. They are annoyed by only one room being booked for the pair of them, and retrieve a package from the front desk. As they discuss the upcoming job, Cha Cha opens the package to reveal weapons and equipment. Hazel hides a large briefcase in the room's vent. Cha Cha admonishes him for the breach in protocol, since they're required to have the case with them at all times.

Detectives Eudora Patch and Chuck Beaman investigate the crime scene at Griddy's Doughnuts. Patch interviews the only witness, waitress Agnes Rofa. Agnes tells Patch all she knows but mentions that she already told her story to "the other detective." Patch catches Diego leaving Griddy's through the back entrance and tasers him. Cuffing him, she confiscates his police radio and forged police badge. Patch angrily tells Diego that he is not police and should not be investigating crime scenes. Diego tells her that she needs his help, but Patch refuses.

At the Academy, Luther struggles to adapt to a routine on Earth after being on the Moon for four years. He talks with Allison who tells him that she told her daughter Claire all about her superhero uncle who lives on the Moon. Klaus begins to sober up and converses with the spirit of Ben Hargreeves. Pogo arrives and asks Klaus if he knows where several items taken from Sir Reginald's study are, explaining that if they're returned there will be no blame or consequences. Klaus denies knowing anything but remembers taking the item, throwing away anything that he was not able to sell, and then selling the rest for drug money.

Number Five is in possession of a glass eye, taken from the future. He heads to the company that manufactured it to try and find the owner in the present, believing that it's connected to the apocalypse. A member of the company's staff refuses to give out the information as patient records are classified. Five threatens him, but security is called to remove him.

At the police station, Detective Beaman informs Patch that the victims at Griddy's were all criminals. However, one piece of evidence didn't seem right: the fingerprints on a knife matched those from a decades old cold case. Patch lets Diego go but threatens him with jail time if he interferes in one of her investigations again.

Vanya goes looking for Number Five after finding him gone from her apartment in the morning. She's relieved to find him at the Academy and apologizes for being dismissive. Five agrees that maybe she was right to be dismissive and that time travel is affecting his mind. As she leaves, Klaus comes out of hiding, having been recruited into Five's plan to get information from the prosthetics company.

At Ishmael's Towing, Hazel and Cha Cha take Syd hostage, and begin torturing him for information. They initially believe that he is Number Five, but as they get information out of him, they come to realize that Five was the kid in the doughnut shop.

Allison talks with Patrick on the phone and conversation becomes heated. Vanya tries to comfort her sister but says the wrong thing, implying that the best place for her is away from her daughter. Allison gets angry with Vanya and tells her that she cannot blame all her problems on their father now that she's an adult.

At the prosthetics company, Klaus poses as Five's dad in an effort to get the information. The employee, Lance, still refuses to divulge it, so Klaus causes a scene in the office that makes it look like Lance assaulted both him and Five. Lance gets the information they request, only to find that the particular serial number on the eye hasn't been sold or manufactured yet. Outside, Five tells Klaus about some of his relationship with Dolores before teleporting away.

At her apartment, Vanya receives a new student, Leonard Peabody. He is older than her normal students, who are generally children. Leonard shows an obvious interest in Vanya, and while she picks up on it, she is reluctant to pursue it quickly. Luther visits Diego at his home, the boiler room of a local gym that he uses in exchange for mopping floors. While there, he discovers that Diego could not have killed their father since he was fighting on the night in question. Luther asks him why Diego didn't just tell him that; Diego retorts that he shouldn't have had to prove his innocence to the family.

Pogo seeks out Allison to make sure she's alright, having been alerted when Vanya called to check up on her. Allison admits she said some rude things to Vanya. Pogo shows her some old security footage of when they were children, admitting that he spends a lot of time in there. He gives Allison the keys so she can watch the videos by herself. Choosing one on the shelf, Allison watches it and finds something unexpected on the tape.

At a department store, Five breaks in to find Dolores, a mannequin that he had a relationship with in the future. Hazel and Cha Cha track him to the store and begin trying to kill him. Five fights back, rescuing Dolores in the process, and holds out long enough for the two assassins to be distracted by the arrival of the police. Five escapes, and Hazel and Cha Cha flee the store as well.

At the gym, Diego hears about the shooting in the department store and heads off to investigate despite Patch's warnings. At the Academy, Allison tries to show Luther the security footage, but they're interrupted by the arrival of Five, who's still recovering from his fight with Hazel and Cha Cha. They ask him what they can do to help, but he tells them there's nothing anyone can do.

In the future, Five finds the fake eye clutched in Luther's dead hand. Five looks around at the bodies of his siblings and recognizes them when he sees the umbrella tattoo on Klaus' wrist.

Changes from the Comic 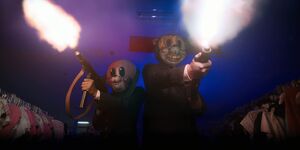 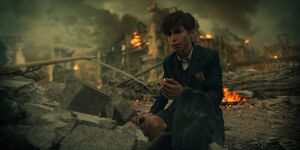 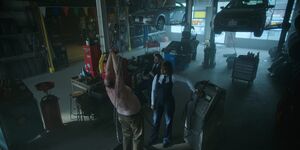 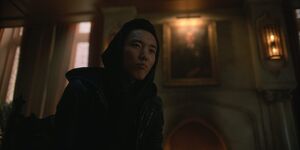 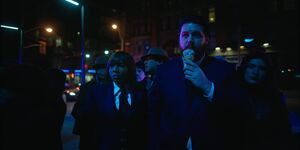 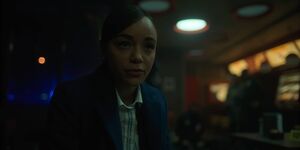 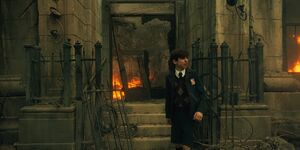 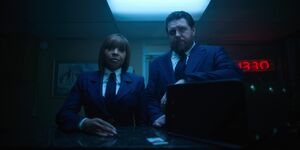