Prior to meeting Hargreeves, Pogo was an ordinary chimpanzee. He was taken to a laboratory to be trained and primed to be launched into space in a rocket. During this time, his development was overseen by Grace and Hargreeves. His launch ended in disaster and Pogo was returned to them gravely injured, but Hargreeves used a serum on him that not only healed him but also made him sapient.[1]

Years later, Pogo becomes Hargreeves' assistant and master of house at the Umbrella Academy. Pogo, alongside the robot version of Grace, helps raise the seven children he adopts in 1989.

Pogo is master of the house both before and after Reginald's death. When the children return to the house following his death, Pogo initially withholds information surrounding his death from them. They eventually figure out that Pogo is withholding information from them, and he reveals everything he knows about his master's death.

As Vanya's powers threaten to tear down the Academy in The White Violin, including everyone in it, Pogo orders Luther and Allison to escape. Heading downstairs, he confronts Vanya, telling her that none of her siblings were responsible for what happened to her. Vanya asks Pogo if he knew about her powers. Pogo informs her that Sir Reginald discovered that her powers were so great that he only wanted to protect Vanya and her siblings. Vanya repeats the question, and when Pogo admits he knew, she uses her abilities to lift him in the air and throw Pogo across the room. Pogo is impaled on a mounted set of antlers and dies.

Pogo was Hargreeve's assistant and closest friend. He stood by Hargreeve's decisions—despite not always agreeing with them—in a respectful way. It is eventually revealed that Pogo was aware of Hargreeves' suicide but respected his master's wishes.

At Reginald's funeral, Pogo acted the most respectful and spoke of Reginald as a better man than he was, showing that—regardless of his master's behavior—Pogo stands by his wishes.

Pogo was unwillingly a part of Vanya's childhood isolation as well as then hiding the secret of her powers. His relationship with Vanya is a distanced one and while he keeps these secrets from her and the family, he has no ill will and is ashamed to have done these grievous things to her.

Vanya is also the person responsible for Pogo's death after he admits to being aware of and keeping quiet about her treatment when she was a child as well as her powers.

After Diego turned off Grace, Pogo was seen working to repair her. When she is functioning again, there is evidence of the two of them sharing a secret. He reminds her that they can never tell the children what happened. She was about to tell Diego the secret before time got turned back. 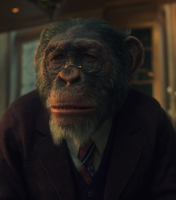 Retrieved from "https://umbrellaacademy.fandom.com/wiki/Pogo_(Netflix)?oldid=9974"
Community content is available under CC-BY-SA unless otherwise noted.