Created for Television By:
Steve Blackman
Developed By:
Jeremy Slater
Based on the Dark Horse Comic By:
Gerard Way and Gabriel Bá
Teleplay By:
Robert De Laurentiis

Ellen Kuras
"Number Five" is the fifth episode of the first season of The Umbrella Academy. It aired on Netflix on February 15, 2019.

Five lets Luther in on his secret. Klaus returns from a harrowing trip through time, and Vanya begins to feel different without her meds.

In the future, a middle-aged Number Five continues to survive in the apocalypse with his only companion, Dolores. As he sits in the ruins of the Argyle Public Library, he is approached by a woman and immediately aims a rifle at her.

In the present, Five tells Luther Hargreeves the truth about his time in the future and the impending apocalypse. Luther asks him why he did not tell them sooner because they could have banded together to help him. Five tells him they already tried and they died, revealing that he found their bodies in the rubble and the false eye he has been tracking was clutched in Luther's hand. Diego Hargreeves returns from the motel and angrily confronts Five about everything that has happened in the past four days that led to death of Detective Eudora Patch. Five continues to tell them about Hazel and Cha Cha, who used to work for the same employer as him.

In the future, the woman introduces herself as The Handler who recruits him into the Temps Commission who attempt to protect the timeline. Five asks her why they do not try to stop the apocalypse, but The Handler tells him that the apocalypse always happens and cannot be stopped. In exchange for five years service, Five would be allowed to retire to a time of his choosing with a generous pension. Five agrees and becomes the Commission's best agent. However, he is simply biding his time with the Commission, working out the equations necessary to get back in time to stop the apocalypse. During a mission to Dallas, 1963, Five breaks his contract and time-travels back to eight days before the apocalypse.

Klaus returns to the bus in a flash of light, dressed as a soldier and with a new tattoo. He is crying and clutching the briefcase. Getting off the bus, Klaus destroys the briefcase.

At the motel, Hazel and Cha Cha search for the briefcase, killing the motel's maid in the process. They assume that Klaus took the case, and receive a message from the Commission asking for an explanation for a round trip time travel to 1968. Hazel goes to find the junkie, while Cha Cha heads off to research the Hargreeves family.

Allison Hargreeves takes Vanya Hargreeves breakfast, only to find that she is planning on meeting Leonard. Vanya is concerned that she has run out of medication. Allison tells Vanya she has a bad feeling about Leonard, but Vanya doesn't want dating advice from a sister she hasn't seen in twelve years. Vanya goes to breakfast with Leonard and they talk about Allison's efforts to be a sister. Vanya reveals that they are holding auditions for first chair at the orchestra since Helen has stopped showing up. Leonard convinces Vanya to audition for the position.

Klaus returns to the Academy to recover from his trip to 1968. Five finds him and recognizes the symptoms of time travel. Klaus tells him about his interrogation at the hands of Hazel and Cha Cha. Five figures out that Klaus stole the briefcase and finds out that Klaus spent almost a year in the past. Five asks where the briefcase is, only to find out Klaus destroyed it. Five is angry since he could have used it. Diego starts to blame himself for Patch's death because he remembers telling her that she should act more like him. Diego goes to leave the Academy and Klaus tags along.

At the library, Allison looks up information on Leonard and doesn't find a lot. One booth over, a woman sneezes and Allison says "bless you," unaware that the woman is Cha Cha, reading Vanya's book and learning about the Hargreeves.

Klaus asks to be let out of Diego's car and goes into a Veterans of Foreign Wars bar. He takes a drink and approaches a display from the Vietnam War crying softly. The veterans in the bar take notice of Klaus, but Diego arrives first trying to find out what is wrong with his brother. As Diego tries to get the truth out of Klaus, they are confronted by the veterans who accuse Klaus of pretending to be one of them. Diego tries to defuse the situation, but Klaus refuses to apologize and a bar fight ensues.

Hazel meets with Agnes at Griddy's and have lunch together. They talk about the future. Agnes wants to retire to the country in a year's time and open a small bakery. Hazel tells her about some of his life, being on the road 52 weeks and year with no place to call home. Telling her that life is short, Hazel advises her to fast-track her plans.

Diego tries to get to the bottom of his brother's behaviour and why he uses drugs. Klaus admits that he lost the only person he loved more than himself. Diego tells him that he is lucky – if Klaus loses some, then he can use his powers to see them again. Diego spots Hazel and Klaus recognizes him as one of his torturers. They follow him.

At the Academy, Five works on a probability map, trying to figure out whose death would stop the apocalypse. He focuses on a gardener named Milton Greene; the idea that Five could murder an innocent shocks Luther and he threatens to drop Dolores out of a window to order to get a gun away from Five. Luther tells him that he knows Five is still a good person, or he would not be trying to save them all. Five says there might be another way, but it is almost impossible.

Allison tells Vanya about not being able to find much on Leonard, which she finds suspicious. Vanya is angry that Allison is checking up on her, thinking her sister does not trust her.

Hazel and Cha Cha regroup at the motel. Hazel has not been able to find the briefcase, while Cha Cha fills him in on the Hargreeves family and their abilities. They realize that Diego has followed them to the hotel when they get a message from Five to meet them, claiming that he has the briefcase. They manage to leave the motel by fooling Diego and Klaus and shooting out the tire on their car so they can't follow them.

Vanya auditions for the position of first chair. Initially, the conductor is uninterested in her playing but something strange begins to happen. As Vanya plays, ripples push out from her violin and captures the attention of the conductor and staff and they listen in rapt attention. Allison searches Leonards home but leaves when he arrives.

On a deserted highway, Luther and Five wait for Hazel and Cha Cha to arrive. Five's plan is to pretend to have the briefcase and give it to them in exchange for them contacting The Handler. Cha Cha makes a phone call and as they wait, an ice-cream truck approaches with Diego and Klaus. Hazel and Cha Cha believe it is a set up and begin firing at the van. Diego drives the van into them, knocking them flying. In mid air, everything freezes.

With time paused, The Handler arrives. She offers Five a deal. They will call off the hit on him in exchange for him returning to their employ – but this time, in a management position. She even offers to reversing the de-aging process. Five agrees on the condition that his family survives as well. Before shaking hands with The Handler, he unloads Hazel's fallen weapon, and moves a bullet that would hit Luther. Taking The Handler's hand, they disappear and time restarts. Although surprised by Five's disappearance, Luther collects Diego and Klaus and they drive off. Hazel tries to shoot them but his gun has no bullets in it. Cha Cha grabs the discarded briefcase and finds that it is full of scrap.

Vanya goes to Leonard's house and tells him that she got first chair. Leonard is ecstatic; Vanya cannot believe how well she played without her medication. They kiss and make love; Vanya is unaware that Helen Cho's body is in Leonard's attic.

Back at the Academy, Grace is successfully repaired and restarted by Pogo. He reminds her of a secret that the children can never know. 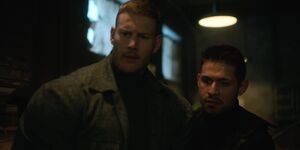 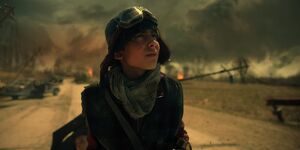 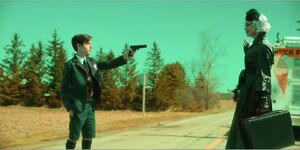 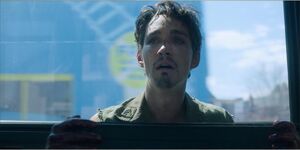 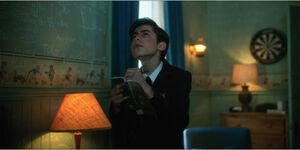 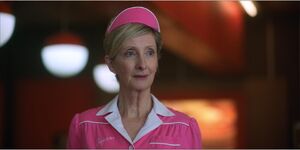 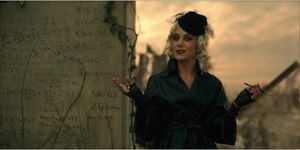 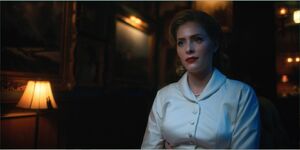 Retrieved from "https://umbrellaacademy.fandom.com/wiki/Number_Five_(episode)?oldid=12676"
Community content is available under CC-BY-SA unless otherwise noted.