"Jesus, who do I gotta kill to get a decent cup of coffee?"
—Number Five[src]

Number Five is one of the forty-three children who were all born on the 12th hour of the first day of October 1989 to mothers without any previous signs of pregnancy. The baby was one of seven adopted by Sir Reginald Hargreeves with the intention of training them to save the world. Number Five has the ability to time travel and ended up trapped in the future as an old boy, where he discovered that the world was in ruins. He eventually returned to The Umbrella Academy years later with a message that the world was due to end in eight days. Number Five is played by Aidan Gallagher in the Netflix adaptation of The Umbrella Academy. Sean Sullivan plays an older Number Five.

After he fails to avert the apocalypse, Five finds himself transported to Dallas, November 25, 1963, in the center of another apocalypse. He quickly learns that this apocalypse is a direct result of him and his family manipulating time; once again he is forced to assemble The Umbrella Academy to mitigate the threat to humanity.

His ability is space-time manipulation. It allows him to travel through space and time and teleport objects without physical contact.

"That's one badass stapler."
—Five to a robber[src]

He was seen in a flashback, during a crime scene. Sir Reginald had him and the others wear their professional attire (black suits with white masks) and head to the scene of the active crime. From there they entered the bank, most likely through a back door entrance or through Five's teleportation. The remainder of his siblings had subdued most of the criminals. One robber told them to stay back. Five teleported behind him and questioned what the Robber would do if they didn't. The robber, shocked, attempted to shoot Five but Five teleported behind him again. The robber spun round to use his gun but is surprised to see he now holds a stapler in his hand. Five takes the stapler and pushes it into the Robbers head. After most of the robbers are subdued, Five and his siblings watch as Ben uses his power to kill the rest of the thieves. The Umbrella Academy is showcased outside of the crime scene surrounded by news reporters and journalists.

Later throughout the week, Five exits a limousine outside of his home. He and his siblings are intruded on by Harold Jenkins, cosplaying their outfits. Leonard attempts to console with Reginald, divulging that he was born on the same day as Five, and would like to ally with the Umbrella Academy. Five watches as Reginald mortifies and drags out Harold in front of a crowd. But he and the others brush the occurrence away and return to their normal lives.

One day, Five is eating lunch when he has the sudden thought of time traveling. He approaches his father and announces that he wishes to travel in time. Reginald is shocked by his sudden exaggeration and explains that Five has not yet tamed his own ability. Five is agitated by Reginald's comment, provoked that Reginald underestimates him. With that, he leaves his home. With his ability to jump through space and time not yet perfected, Five found himself transported to a near future in which the world had been destroyed. Five attempts to travel back to the present but finds himself unable to do so.

Five finds the Hargreeves manor turned to rubble, with all of his siblings, except Vanya, dead. Luther's corpse holds a prosthetic eyeball, which Five acquires. He accepts his fate of doom and seclusion and strives to survive in the Apocalypse as long as he can. He procures a newspaper with the date of the Apocalypse.

Having managed to travel back to the present, Five explains the events but finds that Vanya does not believe him, citing that time travel has messed with his mind, just as their father had warned.[2] Five has trouble convincing his siblings of the events too, but is eventually able to convince them when they're confronted by Hazel and Cha-Cha, who attack them.[3]

With the rest of his siblings on board, Five is eventually forced to reveal their future deaths to his siblings, who question why he did not tell them sooner. Later, a flashback to the future — in which all of the Five's siblings are dead — Five is recruited by the Temps Commission who agree to allow him to retire to a time of his choosing after five years of service; he agrees, but secretly uses this time to travel to the present, eight days before the apocalypse.[4]

With the revelation that Vanya is responsible for destroying the Academy — not the apocalypse — Five is conflicted with his siblings on how best to handle the situation. Eventually, they decide that they shouldn't abandon Vanya. A fight breaks out between Vanya, Five, and the Umbrella Academy members, and all hope seems lost. Five reveals that he has a plan: he will take all of his family with him through time in an effort to avoid the apocalypse. Despite not being sure of his abilities, Five is successful in traveling through time with his family.[5]

Following his attempts to avert the apocalypse, Five finds himself transported to Dallas, November 25, 1963, in the midst of another apocalypse. He witnesses as his siblings, the Umbrella Academy fight the Russians prior to a nuclear explosion that ends the world. Moments before the world ends, however, Hazel arrives and tells him to come with him if he wants to live; Five obliges and Hazel takes him back in time to before the apocalypse and explains that he caused the apocalypse by bringing his siblings back in the timeline. Hazel tells him to save the world one more time but is unable to explore more before he is assassinated by the Swedes.

Five tries to get his siblings on board with his attempt to save the world for the second time, but is instantly rebuked by both Luther — who has built a life for himself — and Diego, who is attempting to prevent the assassination of President JFK.[6] Five is later able to convince Diego to help him save the world, and the two try and talk with the 1963 version of their father about his involvement in the assassination of JFK.[7] Five is able to convince Vanya to his side shortly after he offers insight into her past, which she is happy to receive due to her amnesia.[8]

After Five is able to get all of his family back together, and on his side, he realises that his only option is to work with the Handler in exchange for a briefcase from the Temps Commission that will allow him to travel back with the Umbrella Academy back to their rightful place within the timeline. Five makes a shocking discovery along the way that Lila Pitts is actually the Handler's adoptive daughter. The Handler offers Five a proposition: she will give him a briefcase if he agrees to assassinate the members of the Commission board; he agrees.[9]

Five's attempts to get his family back to their timeline fail, however, and he is forced to abandon the briefcase before it is activated.[10] Five explains to Luther that the only option is to go face a previous version of himself in the same timeline and plead with him to hand over the briefcase. Older, previous Five is initially reluctant to give Five the briefcase, but Five is able to convince him in exchange for the correct math that would return him to 2019 in his original body; Five is annoyed to find that the briefcase is destroyed in the process, however.[11]

After the members of the Umbrella Academy are able to save Vanya from destroying the world for a second time, Five and the other members of the Academy face off against the Handler and the Commission. They are successful in killing the agents, but all of the members of the Academy — except for Five — are shot to death by the Handler. Scared, Five remembers advice given to him from Reginals about traveling back in time minutes, rather than decades. He is able to travel back in time and prevent the Handler from killing his siblings and makes a deal with Herb to allow him to take a briefcase and return his family to their rightful place within the timeline.[12]

At age 13, Number Five became trapped in the apocalyptic future for more than 40 years. When he found a way back, his body regressed to that of his 13-year-old self, while his mind stayed the same. As a result, he has the personality of a 60-year-old and is frustrated at being trapped in the body of a child. He is shown to have a genius intellect, often dismissing others, including his family, as stupid or inferior, and expressing disinterest in their personal affairs. He is also shown to be sarcastic, pragmatic, and incredibly prideful. He also exhibits impulsive behavior due to his prideful nature, which is seen when he brazenly uses his time-traveling powers as a boy despite Reginald Hargreeves' warnings that he was not fully prepared to wield them.

Number Five is also shown to be a ruthless and incredibly efficient killer. While he does not enjoy killing, he seems to have no qualms about the people he has killed and is more than willing to eliminate anyone, even innocent people, whose deaths may stop the apocalypse from happening and even displays nonchalance when making plans to murder them. He gained fame in his times as an agent of the Temps Commission for his success in killing countless individuals on missions, which he did as part of his contract in order to get back home to the present. Overall, Number Five has shown to be perfectly willing to eliminate anyone who stands in the way of his goals.

Despite his antisocial behavior, he does have compassion and cares for his family deeply. He works tirelessly both in the past and future to prevent the apocalypse and is seemingly the most devoted member of the family in stopping it. He even refuses to involve his family most of the time out of fear they would die. When he "renegotiates" his contract with the Temps Commission, he demands that his family be saved as well.

Number Five was in a "relationship" with a mannequin called Dolores, who kept him company during his time in the future, as well as in the present time after he found her in the department store during his fight with Hazel and Cha Cha. He is shown to be deeply caring and protective of Dolores and treats her like a real person, even going so far as to have conversations with her as if she were talking to him. Despite his affection, Five ends up returning Dolores to the department store and saying his goodbyes. On his way out, he asks an employee to give her something new to wear, because "she likes sequins."

Vanya and Five are very close siblings. Five was one of the siblings that refused to ignore Vanya. She was the first one he told about the apocalypse. On a deeper level, they truly understood each other. They would never hurt or interfere in other's lives. 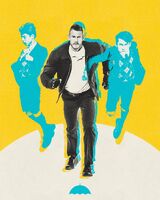 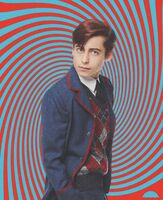 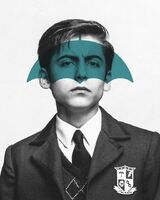 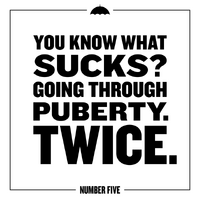 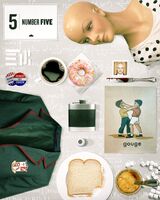 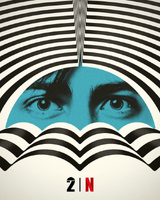 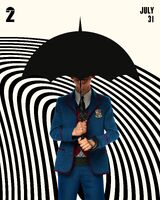 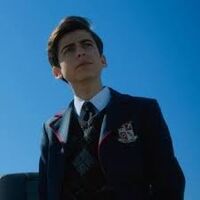 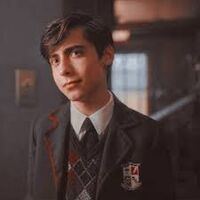 Retrieved from "https://umbrellaacademy.fandom.com/wiki/Number_Five_(Netflix)?oldid=12905"
Community content is available under CC-BY-SA unless otherwise noted.