"Man on the Moon"

Created for Television By:
Steve Blackman
Developed By:
Jeremy Slater
Based on the Dark Horse Comic By:
Gerard Way and Gabriel Bá
Teleplay By:
Lauren Schmidt Hissrich

Ellen Kuras
"Man on the Moon" is the fourth episode of the first season of The Umbrella Academy. It aired on Netflix on February 15, 2019.

The story of Luther's transformation emerges. At the motel, Klaus puts Hazel and Cha-Cha's training to the test. Allison grows suspicious of Leonard.

Seven years ago, Luther Hargreeves finds himself alone in the Academy with all of his siblings gone. He spends his days idling, waiting for a mission. When a biochemical substance falls into the wrong hands, Sir Reginald sends his Number One to deal with the threat. Luther points out that there's no need to call him by his number, since he's the only one left.

The mission goes badly and Luther is critically injured. Unable to save him, Sir Reginald injects him with a serum that saves his life. As a result, Luther wakes from a coma with a new, hairy, ape-like physique. The change shocks him greatly.

In the present, Allison wakes Luther and shows him Grace, who has been shut down. They come to the conclusion that the two intruders from the previous night were responsible. Allison tries to get Luther to open up about his body and why he didn't tell her about it, but he tells her he's fine and doesn't need help.

Vanya wakes up on Leonard's couch, having fallen asleep the previous night. She panics, since she has rehearsal and didn't bring her medication refill. Leonard convinces Vanya that she can go without it for one day and walks her to rehearsal. They talk more about family on the way. As they arrive at the Icarus Theatre, they're passed by Helen Cho. Vanya explains about the position of first chair in an orchestra and how Helen hasn't been unseated for five years.

At the motel, Hazel and Cha Cha try to torture Klaus but fail miserably; strangulation causes him to become aroused, and water boarding just relieves his thirst. Klaus laughs at them since they managed to kidnap the one Hargreeves who nobody tells anything to. Cha Cha has to buck Hazel's spirits up and refocus their efforts.

Detective Eudora Patch finds Diego laid out on her front porch. They talk about the cases but Patch wants to know why he's really there. Diego tells her that his mother died and Patch expresses her sympathy, knowing how close the two were. Talk turns to the two masked criminals, and Diego tells Patch that they attacked his home last night looking for his brother, who's now missing. Patch tells him to let her handle this, since she's the police, but Diego responds by advising her to try things his way for once.

Allison heads to Vanya's apartment and finds Leonard inside. Leonard claims that he was returning Vanya's keys because she left them at his place, and needed to use the restroom. Leonard begins to question why Allison is there, since the family usually doesn't get along, and she tells him to mind his own business. Allison takes the keys to give to Vanya.

Number Five ambushes Lance Biggs and interrogates him about the false eye. Biggs is working a deal where he sells prosthetics on the black market, meaning the eye that Five is trying to track down might already have been sold. The copy of buyers' information is in the lab, so Five tells Biggs to take him there and hand it over.

As Hazel and Cha Cha talk about their interrogation techniques, Klaus begins to sober up. Ben Hargreeves guesses his sobriety is the reason that an old Russian woman's spirit has appeared to Klaus. Hazel and Cha Cha go back to basics, check Klaus' clothing, and find his drugs. Playing on his addiction, they begin destroying his drugs in front of him. In an effort to stop them destroying his stash, Klaus immediately gives up that Number Five was staking out Meritech Prosthetics. Pleased at the progress, Hazel and Cha Cha begin to eat Klaus' chocolate unaware that it's laced with cannabis. The now-high assassins torch the Meritech building and destroy everything. Five watches as the building burns down and screams in despair.

Luther and Diego go in search of Five, while Allison goes to tell Vanya about Mom. Allison apologizes for yesterday and asks Vanya to go for a drink.

Hazel and Cha Cha come down from the high at Griddy's Doughnuts and realize that Five is trying to change the timeline and therefore they will be responsible for the apocalypse. At the motel, Klaus is hidden in the closet and begins to have flashbacks to the time Sir Reginald locked him in a mausoleum in an attempt to hone his abilities to contact the dead. Klaus tries to get the attention of the maid cleaning the room, but she's wearing headphones and doesn't hear him. Ben comforts Klaus through the withdrawal but tells him that the worst part of being dead is watching someone have what he doesn't throwing their life away.

Patch and Detective Beaman investigate the Meritech arson. Patch notices a van parked across from the building with the message "Your brother says hi" scrawled on the window and a matchbox with a motel name on it. Patch remembers that Diego is looking for his brother and connects the dots, unaware that the message is about Klaus, not Five.

Allison tells Vanya about finding Leonard in her apartment, but Vanya is sure there's a reasonable explanation. They begin to bond as sisters.

Hazel and Cha Cha return to the motel and set up to ambush Number Five, assuming he'll get the message they left on his van.

In a flashback, Sir Reginald comes to let Klaus out of the mausoleum, asking if he's mastered his fear of the dead. When it becomes clear that Klaus is terrified, Sir Reginald decides to lock him back in for another three hours.

Patch arrives at the motel and tries to get the clerk to give her information on the criminals. The clerk refuses on the grounds of privacy, and tells her to return with a warrant. Patch calls Diego and leaves a message with the owner of the gym he lives at, saying she's found his brother and asking him to meet her at the motel.

Luther and Diego take Five to the gym. Still drunk, Five tells them the identity of the two assassins who attacked the Academy and that the apocalypse is coming.

At the motel, Ben realizes that the old Russian woman that has appeared to Klaus is one of Hazel and Cha Cha's victims. He tells Klaus to use the spirits to learn secrets about his captors and use them against the pair. When Klaus mentions the name of the Russian woman, the assassins appear shocked.

At Vanya's apartment, she and Allison continue to bond. Vanya finds a bunch of flowers in her bedroom from Leonard, assuming that's the real reason he was in her apartment, not to use the restroom. Vanya calls Leonard to thank him and they arrange to have breakfast the following morning.

At the motel, Klaus is surrounded by the spirits of Hazel and Cha Cha's victims, including Syd. Some of the secrets that Klaus learns drive a wedge between Hazel and Cha Cha, especially the revelation that Hazel let a victim's wife go but claimed he killed her instead. The pair have a conversation about how Hazel has been distracted lately.

Patch can no longer wait for Diego and heads to out to try and find the room with the two criminals. Through the window, Klaus sees her and bangs his head on the table to attract her attention. Entering the room, Patch frees Klaus and holds Hazel at gunpoint. However, Cha Cha appears behind Patch and shoots her through the chest, killing her. Klaus escapes the room through the vent and takes the assassins' briefcase with him. Hazel and Cha Cha realize Klaus has the briefcase and head out to find him. Klaus makes it to a bus and tries to open the briefcase, hoping it contains money. He disappears in a flash of light.

At the gym, Luthor and Diego leave Five asleep in Diego's bed, Al gives Diego the message from Patch and the siblings realize she's found Klaus. Diego heads off to back her up, but arrives too late and finds her body in the motel room. Angry and distraught, Diego flees the scene with a receipt from the donut shop found on the motel's table upon hearing police approaching.

Changes from the Comic 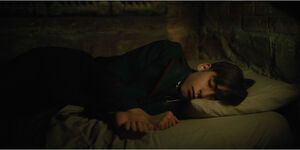 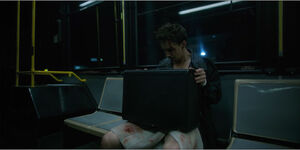 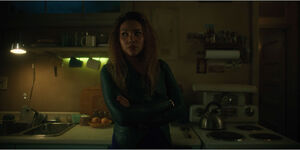 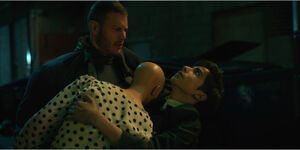 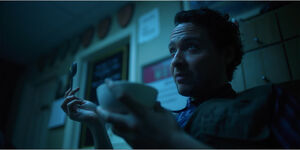 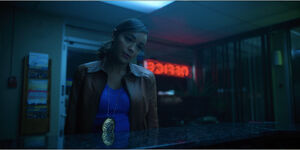 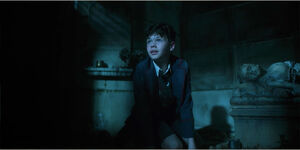 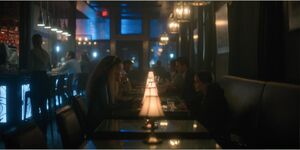 Retrieved from "https://umbrellaacademy.fandom.com/wiki/Man_on_the_Moon?oldid=12675"
Community content is available under CC-BY-SA unless otherwise noted.