View source
watch 01:36
We're Getting Mutants in the MCU - The Loop
Do you like this video?
Play Sound

"I know everything about you, you are an open book written for very dumb children!"
—Lila Pitts to Diego Hargreeves[src]

Lila Pitts is one of the forty-three children born on the 12th hour of the first day of October 1989 to mothers without any previous signs of pregnancy. She possessed the ability to mimic the powers of others, although she was limited to only mimicking one at a time and could only do so when within a certain range.

She is initially introduced as a fellow patient at the psychiatric institution that Diego Hargreeves finds himself in when he is transported back in time. The two get along well and plan an escape together, which ends up being successful. Unbeknownst to Diego, Lila was working undercover for the Handler, her adoptive mother, and was planted in the institution as a way to get an insider within the Umbrella Academy.

Lila was one of the forty-three children born on October 1st, 1989 to mothers with no previous signs of pregnancy.[6] She was initially raised by her biological mother and her partner (her stepfather). However, when the Handler learned of young Lila’s existence, she saw potential to make her a soldier and sent the Commission after them. After Lila’s parents were killed by Number Five at the request of the Handler, Lila was taken in and raised by the Handler for numerous years before she eventually began working for her indirectly. She was told that her parents had been killed in a home invasion.

In the first episode of the season, viewers find Diego dressed in white and residing in a mental institution, where he’s unwillingly sitting in group therapy with some other disinterested participants. He meets Lila shortly after, and the two successfully execute a plan to escape the facility. Lila is reluctant to leave Diego, despite him telling her that the two of them need to go their separate ways.

Lila and Diego grow closer and closer, and she eventually becomes privy to Five's plans to avert a second apocalypse and restore the timeline to how it previously was. Unbeknownst to Diego, however, Lila is the adoptive daughter of the Handler and has been placed close to Diego to allow her to protect Number Five at all costs. Lila is able to protect Five from the Swedes despite this raising concerns with Diego, and Five finally figures out that she is working for the Commission with the Handler.

Five alerts Diego to this fact, and he alienates Lila and refuses to talk with her or interact in any other way; despite this, Lila tells Diego that she does love him, but he is reluctant to believe nor accept it. This leaves Lila with no option but to drug Diego and bring him into the Commission, where she is now Head of Security. Lila is able to broker a deal with the Handler to allow Diego to take up a role at the Commission, but she is made accountable for Diego's actions, with the Handler citing that she will be the one to personally kill Diego if the need arises.

Lila is annoyed to find that Diego has left the Commission, and along with the Handler, tries to track him down and eliminate the Umbrella Academy once and for all. In a fight between the Academy and the Commission, she shows that she is able to mimic any ability, which gives her an advantage over the members of the Academy as they fight. Eventually, Diego is able to convince her that she is like them, and that they are her family. She questions the Handler over if she ever loved her, and the Handler shoots her, killing her instantly. Five is able to go back in time and avert this, and Lila escapes the Cooper farm unscathed.[6]

Lila appears to be a carefree, upbeat and slightly crazy woman (earning the nickname "crazy lady" by Five, later repeated by Diego) but it's only a cover to her sadness, Lila is deeply traumatized by her childhood, the assassination of her parents and being raised as a heartless assassin by the Handler. Diego, initially her target, is able to see beyond that and bring a softer side out of Lila until Five blows her cover exposing her as an spy from The Commission. Diego simultaneously brings out a manipulative and obsessive side of Lila such as when he tells her she's a liar and he will just pretend they never met, Lila is unable to accept his rejection and drugs him and drags him to the commission introducing him to The Handler as her boyfriend, Lila is unable to understand his "betrayal" when he escapes with his family and calls him out on it when they come face to face again, Diego however understands why she acts the way she does, because she is scared, he tells Lila that he and his siblings can be her family but she is torn and vanishes with a briefcase. Her fear leads her to manipulate Diego again coming back into his life telling him they have a teenage child after she spent 12 years away as test to see how he would do as a father instead of telling him she was pregnant. Lila feared his rejection of the baby and didn't trust herself as a mother after being raised by The Handler. Despite her questionable behavior towards Diego it comes from a place of true love, Lila is capable of forgiving Five for killing her parents and bonds with him as well as the rest of Diego's family, proving Diego right that they can be their family.

Lila currently does not have any powers after the reset of the universe.[5][7]

Diego and Lila met in a mental hospital and sparked a relationship from there. However, Diego feels betrayed when Lila is discovered to be a member of The Commission. As a result, Lila kidnaps him and brings him to work at The Commission, but this is because she genuinely loves him and doesn't want to lose him. When she runs away from him at the barn, she returns to the Commission to see his face again on the Infinite Switchboard.

After fleeing to Berlin, Lila discovers that she's pregnant and recruits Stanley in an attempt to test Diego on his parenting abilities. After revealing her pregnancy to Diego, she admits that she genuinely wants to have a family with him. When the universe is reset, Diego and Lila leave together and prepare to start their new family.

After the death of her parents, the Handler took in Lila as her adoptive daughter and seemingly formed a genuine bond with her. Unbeknownst to Lila, the Handler had identified her power and ordered her parents killed to take her under her wing all along. When the truth comes to light, Lila feels betrayed by her 'mother' and is shot by her when asked to tell her the truth. Number Five goes back in time enough to stop the Handler from shooting Lila or any of the Umbrella Academy. In this new timeline, the Handler is shot before she can answer her pleas for the truth and a distraught Lila flees.

Upon returning to the Commission, Lila discovers that the Handler killed her and realizes she never truly loved her. When Lila discovers she's pregnant, she fears she'll fail at being a mother the same way the Handler failed her. However, Diego reassures her that unlike the Handler, she is a good person and not heartless. 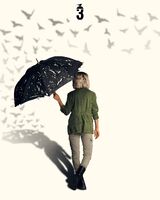