"I Heard a Rumor"

Created for Television By:
Steve Blackman
Developed By:
Jeremy Slater
Based on the Dark Horse Comic By:
Gerard Way and Gabriel Bá
Teleplay By:
Sneha Koorse

Jeremy Webb
"I Heard a Rumor" is the eighth episode of The Umbrella Academy. It aired on Netflix on February 15, 2019.

As Vanya practices controlling her new abilities, Allison tags along with a local cop to find out what happened outside the restaurant.

As Allison drives out to Harold Jenkins' grandmothers house, she remembers the events of a year ago when Patrick caught her using her power on their daughter Claire to make her go to bed. Allison arrives at the house and finds it empty, but she spots Vanya's violin case through the window and knows she's in the right place.

At the hospital, Vanya is concerned when Leonard checks himself out of the hospital, claiming that they want him to come back the following day to fit a prosthetic eye. One of the staff makes him sign voluntary release papers and Vanya asks about the other three men in the parking lot the previous night. She learns that two are dead and the last one is in critical condition.

Luther wakes up in the Academy with one of the women from the rave in his bed. Klaus, still sober, calls a family meeting consisting of him, Luther, Five, and Ben's spirit (although the others are not aware of his presence). Klaus tells them about his conversation with their father and the revelation that he killed himself in order to bring the Academy back together. The others are disbelieving at first until Pogo arrives and confirms Klaus' story telling them Grace's programming was altered so that she could not give first aid and that the security tape was deliberately staged to further a mystery Sir Reginald hoped they would come together to solve to reignite their desire to be a team.

Vanya and Leonard talk about her power display the previous night. Vanya is horrified that she killed the two men, but Leonard tells her it was self-defense. Telling Vanya that she has a gift, Leonard promises to help her control it.

Caught in a traffic jam, Hazel and Agnes discuss their plans. Hazel is visibly uncomfortable with Agnes' plans for three years worth of trips knowing that the world will end in days. Allison is in the same jam, close to where Vanya trigger her powers the previous night. Spotting something, Allison gets out of the car and finds Vanya's scarf. She questions a local police officer, Sergeant Dale Cheddar, over what happened. Cheddar recognizes her and Allison convinces him to let her tag along on the investigation by claiming to be researching a role as a small-town cop.

At the police station, Diego Hargreeves tells Detective Chuck Beaman that he didn't kill Patch. Beaman knows he didn't, but he's not the one Diego has to convince since he's being transferred upstate. Telling Diego that Patch knew that he cared as much about helping people as she did, Beaman shakes his hand and slips him the cell key to escape.

Leonard uses Sir Reginald's diary to help Vanya train. In flashback, a four year old Vanya uses her ability to destroy a wine glass using resonance frequencies. Leonard walks her through concentrating on a singular sound, getting Vanya to remember everything from the previous night. Vanya remembers the sound of the engine getting louder and louder until it resonated in her mind and was unleashed. Leonard believes the power to be extraordinary, but Vanya is terrified.

Five talks with Klaus, wondering how their father knew about the impending apocalypse since he did not have the ability to time travel. However, his plan worked because all the Academy came home in the wake of his death. Diego returns having escaped prison and tells them Allison is in danger since she went after Leonard and Vanya alone. They need Luther, who has been missing since breakfast.

In the past, Vanya's training proceeds for twelve days with success. She is able to harness the resonance of a tuning fork to shatter glass. However during one of her training sessions, Vanya harnesses the resonance of a thunder storm outside and destroys a large number of glasses without control. Sir Reginald begins to see just how powerful she could be. Leonard walks Vanya through controlling her power and she successfully repeats the unleashing of her power. Leonard almost slips up when he outright tells Vanya that her power is tied to her emotions, which then focus sounds around her into energy but covers it by telling her he was guessing and putting it together.

Klaus, Diego and Five find Luther drinking in a bar. He claims to be done with the family after finding out that wasted four years of his life on the moon. Diego tells him the Allison is in danger because she went after Vanya's boyfriend who is a convicted murderer. Still having feelings for Allison, Luther tells him he should have led with that and leads the way out of the bar.

Sergeant Cheddar and Allison talk to the survivor of the bar assault, who reveals that Leonard paid them to rough him up so he could look good in front of his girlfriend. However, they took it too far and harassed the girlfriend as well. Allison reveals that she is looking for her sister, and the description of the guy that paid the patient matches Leonard. Cheddar is upset that Allison lied to him but they get no more answers out of the patient due to having more tests scheduled.

Leonard tries to get Vanya to practise her power more, but she wants to work with the violin because her concert as first chair is tomorrow. Leonard tells her that the power is important, but to Vanya, so is her music.

Hazel and Agnes arrive at a motel prior to visiting a bird sanctuary. Hazel asks her what would she do if she had two days to live. After some clarifying about the specifics, Agnes tells him that she would spend her last day with him. Hazel tells her he has to do something that he can't tell her about but promises that he will be back for her the following day.

Vanya practices the violin and then goes looking for Leonard. When she can't find him in the house, she has a flashback to being locked in a special vault under the academy.

At the hospital, Allison questions the staff and learns that Vanya and Leonard were at the hospital in the morning. Cheddar learns the patient they were questioning has gone missing. Allison heads to the Jenkins' cabin and finds Vanya has powers they never knew about. Allison tries to tell her that Leonard is Harold Jenkins, a convicted murderer, but Vanya does not believe it because she loves him. Aware of Vanya's powers, Allison remembers an incident when they were four that suddenly makes sense to her. The other students were told that Vanya was sick and in isolation. Sir Reginald took Allison to see her and told her to say "I heard a rumor you think you're just ordinary." Vanya is furious, believing that her sister knew she was powerful all along. Allison only just understood what had happened, and that their father had made her his accomplice. Vanya's fury builds, threatening to tear the cabin apart. Tearfully, Allison tries to stop her by using her power on her, but Vanya slices with her violin bow and the energy cuts Allison's throat severing her vocal chords.

As Allison clutches her bleeding throat, Vanya screams and realizes what she has done, telling her that she is sorry and didn't mean to do it. Leonard arrives and takes in the scene, pulling Vanya away and telling her that they have to go. They leave Allison dying on the floor, while the body of the surviving attacker lies under the cabin porch.

Allison's brothers arrive to find her bleeding out on the floor of the cabin, and desperately try to save her life. 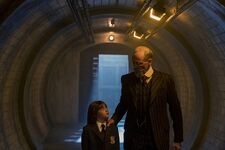 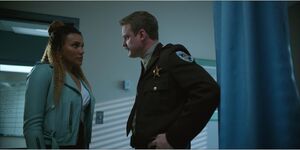 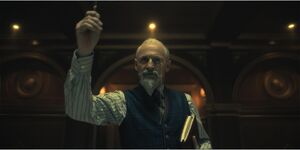 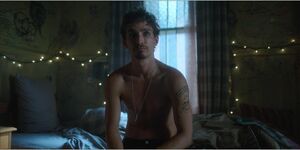 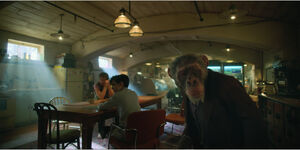 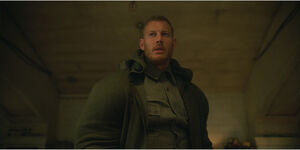 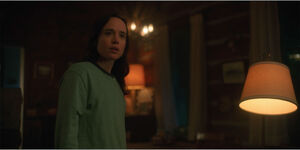 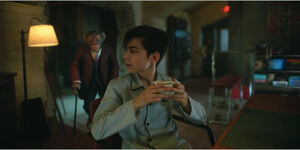 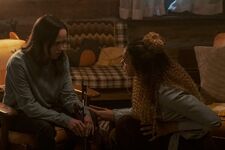 Retrieved from "https://umbrellaacademy.fandom.com/wiki/I_Heard_a_Rumor?oldid=12679"
Community content is available under CC-BY-SA unless otherwise noted.