watch 02:03
Wiki Targeted (Entertainment)
Do you like this video?
Play Sound
This article is about Hazel from the Netflix series. You may be looking for Hazel from the Dark Horse comics.

"Life is short. Future doesn't come with any guarantee. You want something in life, you gotta go for it."
—Hazel to Agnes Rofa[src]

Hazel is a time-travelling assassin employed by the Temps Commission. Partnered with Cha Cha, Hazel is assigned to prevent Number Five from stopping the apocalypse. Hazel is played by Cameron Britton in the Netflix adaptation of The Umbrella Academy.

Hazel is dispatched together with Cha-Cha to keep Five from stopping the apocalypse. During the course of their mission, Hazel falls in love with Agnes Rofa and grows increasingly disillusioned with his job. Eventually, knowing the apocalypse is imminent and they must make most of what time they have, he convinces Agnes to run away with him and pursue her dreams. His relationship with Cha-Cha deteriorates and both receive fraudulent orders from the Commission to kill one another. Hazel incapacitates but decides not to kill Cha-Cha, who vows to track him and Agnes down.

Hazel leaves with Agnes and stops at a motel, where he instructs her to wait for him while he will try to stop the apocalypse. He finds Five at the Umbrella Academy and is told that the apocalypse has been averted since Leonard Peabody is dead. When Hazel returns, he finds Agnes as Cha-Cha's hostage and tries to save her. Agnes is almost killed but saved when the Handler freezes time and breaks up the fight. After she also takes Agnes hostage to force them to work together again, Hazel crashes the car to eject Cha-Cha and leave her for dead. He returns to the motel to save Agnes, shooting the Handler in the head to do so. Agnes forgives Hazel despite having learned of his past.

The apocalypse still happens and Hazel escapes with Agnes using his suitcase just in time. The two spend the next twenty years together until Agnes dies of cancer. Fulfilling a promise made to Agnes, an elderly Hazel reappears to Five on November 25, 1963 as a nuclear holocaust occurs. They teleport ten days into the past where Hazel begins to explain the events. At that moment, the Swedes arrive, leaving Hazel no choice but to hand his briefcase to Five and slip in a copy of the Frankel Footage into his pocket. As Five teleports away as the assassins shoot and kill Hazel.

Hazel first appears as a devoted professional and unrepentant killer. He has no inhibitions about torture or kidnapping and, along with his partner Cha-Cha, is willing to murder anyone, and everyone, who gets between him and his target. However, years on the road as a time-travelling assassin has lost it's novelty for Hazel and now he sees himself as just another working class slob; pounding the pavement, day in and day out, for the man. He's tired of always lugging his heavy suitcase from one motel to another and expresses frustration with the dwindling quality of his travel accommodations. He would much rather spend his time enjoying life's simple pleasures; like donuts, television, dancing, and arson.

As the first season progresses, the overworked, underappreciated, and enthusiastic Hazel starts to dream more and more of a simpler life. One where he can simply slow down and live his life at his own pace, living as he wants to live. He frequently toys with the idea of leaving behind the hitman life, proclaiming when watching HGTV that there's "beauty in the mundane." It later revealed that he has a crush on Agnes Rofa, the waitress at the donut place he frequents (Griddy's Donuts). He becomes infatuated with her peaceful demeanor and sunny outlook on life. He loves that she takes pleasure in simple things like bird watching, and making donuts, and he begins to care very deeply for her as a kindred spirit and, eventually, as a lover.

Hazel's relationship with Cha-Cha was one of mutual respect and near friendship. They were partners presumably many years before the start of the show, and as such had a close bond. However, Cha-Cha was considering killing Hazel and put her employers before him.

Agnes is Hazel's love interest and possible wife. They met at Griddy's Donuts where Agnes worked, and Hazel frequently stopped by for coffee. They formed a close friendship and eventually relationship, and after running away together, they were very close. After Agnes found out the truth about Hazel's past, she was shocked, however she remained with him. They remained together for 20 years before Agnes died of cancer.

Hazel is a professional hitman, a skilled hand-to-hand fighter, and gunslinger.

Although it's never outright stated in the series, it is strongly suggested he is superhuman. He was able to take on Luther in a direct fight, and shrugged off getting stabbed by one of Diego's knives. Also his resilience is high enough to handle blows from Luther. Alternatively, he could have an enhanced body, as the Handler said that they could alter Five's body. 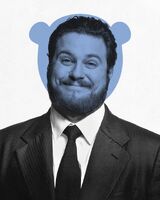 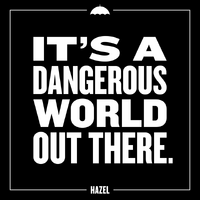 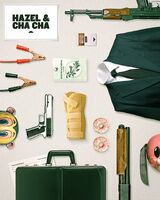 Retrieved from "https://umbrellaacademy.fandom.com/wiki/Hazel_(Netflix)?oldid=12623"
Community content is available under CC-BY-SA unless otherwise noted.