watch 02:03
Wiki Targeted (Entertainment)
Do you like this video?
Play Sound
This article is about the robot from the Netflix series. You may be looking for Mom from the Dark Horse comics or the human version that appears in the second season.

Grace is the primary caregiver and adoptive mother of the seven children adopted by Sir Reginald Hargreeves, modelled on Hargreeves's one time paramour Grace. She is played by Jordan Claire Robbins in the Netflix adaptation of The Umbrella Academy.

When Vanya was young, she had multiple nannies that she killed with her powers when they pressured her into doing something that she didn't enjoy. Frustrated by the amount of nannies Vanya killed, Sir Reginald Hargreeves made Grace to be the perfect housewife and mother to the children of the Umbrella Academy. The children are very fond of Grace, referring to her as "Mom" throughout the series. Vanya and Diego seem to have the most connection to her, as she encouraged them through their own personal struggles.

Throughout The Umbrella Academy

In Extra Ordinary, Allison Hargreeves and Luther Hargreeves watch a security tape of Grace allegedly giving Reginald Hargreeves poison. They begin to harbour suspicions on Grace's involvement in Hargreeves's supposed suicide. Allison and Luther attempt to interrogate Grace on her involvement over breakfast, however she is elusive and vague about her answers before shutting down the interrogation by presenting them with their rather childish breakfast.

After a brief argument over Grace's stability and condition after being left alone for so long in the Academy by herself, Luther and Allison call a family meeting to decide what to do with Grace. At the meeting, the tape of Grace allegedly poisoning Hargreeves is played. Diego points out that Grace was only removing a monocle from Reginald's face, and his perspective clashes harshly against Luther's viewpoint, given Diego is adamant on Grace's innocence while Luther —not entirely convinced that Grace possessed ulterior motives — nonetheless argued that the years of loneliness might prompt emotions of anger and vengeance in the normally colourless android.

Diego reveals that he threw away their father's monocle in order to divert Luther's suspicion away from Grace. This revelation provoked exasperation from Allison but anger from Luther. Vanya interjects and reminded her family that Grace was programmed to be a protector, to intervene if someone's life was in danger and therefore unlikely to have intentionally caused harm. However Luther argues that her hardware may be degrading and that she might need to be turned off to prevent further incidents.

An argument erupts and a vote is taken. Diego opposes Luther and contended against turning Grace off, and both Vanya and Klaus agree with Diego. Allison revealed herself to be on Luther's side and while Ben does not necessarily give a clear vote, but alludes that he was also on Luther's side.

Because Number Five was not present, the vote was tied 3-3, and the Hargreeves decided to wait for Five to also give a vote. As the Hargreeves walk off, Diego and Vanya realise that Grace was listening to the meeting for an undetermined amount of time. When Diego, concerned, asked her if she was alright, Grace corrected her previously dispirited expression with a smile promising to make cookies as everyone seemed so upset.

After Grace left Vanya questions whether or not Grace has her own consciousness or was all her actions and words a modified version of Reginald Hargreeves's (her creator's) personality. Diego asserts that although that might be true at first, "she evolved." Diego argued that Hargreeves only loved himself, therefore, even a diluted version of him would still not be able to care for the children as Grace did.

A flashback to the active period of the Umbrella Academy reveals Grace as the backbone to the organisation. Grace handed a younger Hargreeves her newly repaired domino mask, checked on Luther, complimented Vanya's violin playing, put out a small fire in Klaus' bedroom, corrected Ben's stuck zipper and encouraged Diego as he struggled with his stammer.

Diego contemplates at his younger self in the flashback and confronts Grace about her consciousness and her reason for caring for the Hargreeves children. Diego seems to realise that Grace may not be entirely innocent as he assured her that it's all right "if you hated him [Reginald]". Grace defended Hargreeves by listing his accomplishments sparking Diego's fury at the seemingly practised speech. Diego revealed that Grace did not have a room to sleep in for all the 30 years she had worked for Reginald. Despite this, Grace seems content with her chair and paintings.

In the evening while Grace sits in her chair sewing throughout the entirety of Hazel and Cha Cha's invasion, she seemed completely unaware of the destruction happening around her. Diego realised that not only has she not noticed the gunshots and calamity, she has also managed to sew through her own hand. Faced with the realisation that Grace's hardware is indeed deteriorating, Diego makes the hard decision alone to turn Grace off by accessing a switch located in her left arm after cutting through a rubbery layer of synthetic skin, while reassuring her that "it's gonna be okay." Before shutting off, Grace's face and eyes lit up in an electric blue, with her eyelids fluttering, she implores Diego to "remember" before turning off completely, the blue fading out of her eyes to be replaced by an empty blackness.

Grace died in the collapse of the Hargreeves House caused by Vanya after she obtained the full potential of her powers. Despite Diego and Klaus' best attempts to rescue her, a last sight of Grace was glimpsed through a window before the destruction of the manor. After the collapse, Diego searched through the rubble for her remains. However, he was unsuccessful.[1]

In the second season, it's revealed that this Grace was based off a human woman, with whom Reginald was romantically involved in the 1960s.

Among the other Hargreeves children, Diego is the one who cares most about Grace. Ever since Diego was young, he struggled with stuttering and other issues while he spoke. Grace encouraged him to picture the word in his head which helped Diego get through his stuttering.

Along with Diego Hargreeves, Vanya was very close with Grace. When Grace encouraged or pressured Vanya to do something, Vanya was unable to kill her and listened to what Grace told her to do. Grace was able to fulfill her motherly duties because she was unable to be killed. 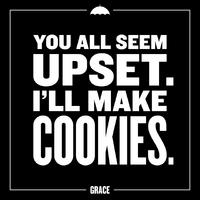 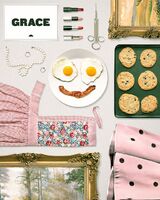 Retrieved from "https://umbrellaacademy.fandom.com/wiki/Grace_(robot)?oldid=12570"
Community content is available under CC-BY-SA unless otherwise noted.