View source
watch 02:07
Spider-Man: No Way Home Trailer Dropped - The Loop
Do you like this video?
Play Sound

Created for Television By:
Steve Blackman
Developed By:
Jeremy Slater
Based on the Dark Horse Comic By:
Gerard Way and Gabriel Bá
Teleplay By:
Ben Nedivi & Matt Wolpert

Andrew Bernstein
"Extra Ordinary" is the third episode of the first season of The Umbrella Academy. It aired on Netflix on February 15, 2019.

Worried their mother is hiding something, Luther and Allison call a family meeting. Cha-Cha and Hazel catch a big break in their hunt for Five.

Five years ago, Vanya buys a typewriter from a pawn shop and begins writing a tell-all autobiography about her life as Number Seven in the Umbrella Academy. The book is a moderate success, with Vanya engaging in a press tour. The members of the Academy all react differently to the book: Luther reads it while exercising, Allison reads it while having her make-up applied, Diego uses the author photo as a target on a punchbag, and Klaus reads it in group therapy with Ben's spirit looking over his shoulder. Sir Reginald has the copy that Vanya sends him; he looks at the inscription and puts the book on the shelf. Eventually, interest wanes in Vanya's book and it is offered at a 50% discount.

In the present, Vanya is running late to her orchestra rehearsal. Arriving after the rehearsal has begun, she tries to take her seat and prepare without disturbing anyone but is unsuccessful. She apologizes for her lateness, and the conductor comments that he didn't even notice.

At the Academy, Allison shows Luther the surveillance tape that appears to show Grace being responsible for Sir Reginald's death. After she brings him tea, he collapses and Grace leaves the room. Confused by what they're seeing, they decide to confront Grace. They question her in the kitchen, but she deflects their answers, telling them that she does not recall some of the events from the night Sir Reginald died. They ask Grace if she was ever angry with their father, and she tells them he was a kind man who was very good to her.

Diego runs into Detective Eudora Patch at the department store crime scene. She tells him that the bullet casings match another murder at Ishmael's Towing where Patch found the driver who was at Griddy's Doughnuts dead after being tortured. Patch tells him that witnesses saw two people fleeing the scene in kids' masks and wonders why there is a spate of violence across the city, with three major crime scenes in twenty-four hours.

After rehearsal, Vanya compliments Helen, the violin first chair, on her skill and how she finds some of the pieces difficult while Helen makes them look easy. Helen tells Vanya that sometimes skill is not enough and that maybe she should pursue something she has a real passion for rather than hacking at third chair violin like a thirteen-year-old.

At the motel, Hazel and Cha Cha recover from the fight with Number Five the night before. A message is sent to them, informing them that their failure has resulted in a 7% reduction in pay for the job.

Outside the Academy, Klaus searches through a dumpster, trying to find the stuff he stole from Sir Reginald's office to appease Pogo. Ben watches. As he searches, Five comes down the fire escape, hoping to leave the Academy undetected. Klaus offers to go with him but he declines the help, and leaves in a van. Five drive to Meritech Prosthetics and begins to stake out the location. He takes Dolores out of the bag and apologizes for keeping her in there for so long.

Luther and Allison discuss Grace's possible involvement in their father's death, and the conversation soon turns to Allison's family. Luther finds out that the reason Patrick won custody is that Allison used her power on Claire. As a result, Allison has to attend counseling sessions before being allowed visitation rights.

After rehearsal, Vanya heads to Bricktown to visit Leonard's woodworking shop. They continue to bond and Leonard reveals that he stayed up all night carving a wooden violinist figure, and gives it to Vanya. Outside, Leonard invites Vanya to dinner and she accepts, just as Allison arrives. Leonard recognizes her as a famous actress and member of the Umbrella Academy, then asks if Vanya was involved. Vanya says she was like the fifth member of the Beatles, and Leonard tells her he was more of a Rolling Stones fan anyway. Allison asks Vanya to come home for a family meeting about Mom and apologizes for the way she spoke to Vanya at their last meeting, saying that she isn't good at being a sister.

Luther uses Klaus to track down Five and tries to bring him back to the Academy for the family meeting about Grace. Five tells him that what he's doing is more important. Luther tells him that Five's problem is that he thinks he's better than the rest of them when really he's just as screwed up like them. Five tells him that he's wrong: he doesn't think he is better, he knows he is.

At Griddy's Doughnuts, Hazel talks with Agnes about how great doughnuts are and they begin to hit it off. Cha Cha arrives and they question Agnes about the night that Griddy's was shot up, focusing on the boy who was in the shop. They tell Agnes they were hired by the boy's family to ensure his safety, and Agnes tells them about the umbrella tattoo he had on his wrist.

Luther, Allison, Diego, Klaus, and Vanya gather at the Academy to discuss Grace. Luther shows the others the video recording and they realize it shows Grace taking Sir Reginald's monocle. Luther wonders where it is now, since he searched everywhere, including Grace's possessions. Diego admits to taking it from Grace after the funeral because he knew Luther would act this way if he found it on her. The discussion turns to the possibility of shutting Grace down. Her programming was meant to kick in to save someone's life if it was in jeopardy, and Luther thinks her hardware must be breaking down if she failed to save Sir Reginald and allowed him to die. They take a vote; Luther and Allison want to shut Grace down. Diego, Vanya, and Klaus vote against, with Klaus telling them that Ben would agree with him if he was here. Ben's spirit disagrees. Luther insists the vote isn't final, since Five isn't there, and they postpone the decision.

In a flashback, the members of the Academy mobilize for a mission. Grace is shown moving through the chaos helping each of them in turn, putting out a fire in Klaus' room, helping Ben with his uniform's zip, and assisting Diego with his stutter. In the present, Diego talks with Grace and tells her that he would understand if she wanted to hurt Sir Reginald, who didn't even provide her with a room, just a seating area in front of paintings where she could recharge.

Five continues to watch the front of the Meritech building and sees Lance Biggs place a large suitcase in a car and collect a brown envelope. Five wonders what he's up to.

Hazel and Cha Cha arrive at The Umbrella Academy, having matched the tattoo to the Academy's crest. They find a painting of Number Five and know they're in the right location. Their presence causes a fight. While Klaus relaxes in a bath with headphones on, completely unaware of the danger, Luther, Diego, and Allison fight off the intruders. During the fight, Vanya is injured by Hazel, and Luther's ape-like body is revealed to his siblings when he saves them from a fallen chandelier. Eventually, Hazel and Cha Cha retreat separately.

After the battle, Diego checks on Grace and finds that she was completely unaware of the battle raging around her. He sees that she has been running her cross-stitching needle through her own hand and realizes that maybe she is faulty. Tearfully, he cuts her arm open and removes a power cell, shutting her down. Still angry, Diego wonders why Vanya is still in the Academy, accusing her of being a liability in this type of situation. Allison tries to make the situation better by telling her that it's because she isn't trained for the danger, which Vanya takes to mean she isn't like them. Vanya leaves and ends up at Leonard's house. He takes her inside, concerned because she's bleeding from a head wound.

Cha Cha arrives back at the motel to find Hazel already there, eating doughnuts. Cha Cha is angry at Hazel, wondering where he's been and how he thought getting doughnuts was a good idea. Cha Cha begins to brush the night off as a total loss but Hazel takes her outside and opens the trunk of their car. Inside is bound and gagged Klaus, kidnapped from the Academy.

Changes from the Comics 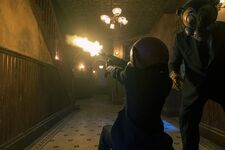 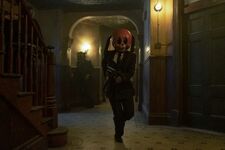 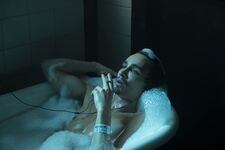 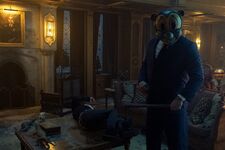 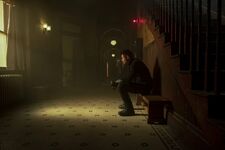 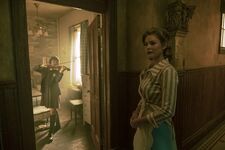 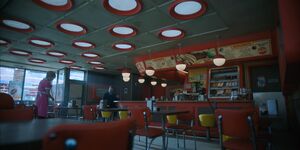 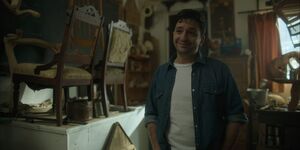