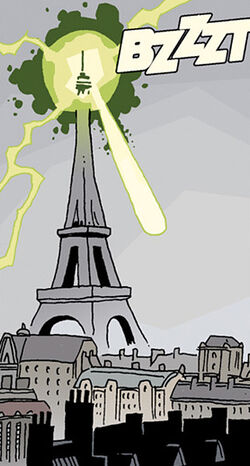 The Eiffel Tower was a monument located in the city of Paris, and secretly a spaceship designed and controlled by the Zombie-Robot Gustave Eiffel. One day, the Eiffel Tower went berserk and started to kill people by throwing them off the top, forcing the Umbrella Academy to save the day. During the battle, which resulted in the death of Eiffel, the Tower's launch sequence was triggered and it blasted off. The Eiffel Tower crashed on the Moon.[1]

Retrieved from "https://umbrellaacademy.fandom.com/wiki/Eiffel_Tower?oldid=6777"
Community content is available under CC-BY-SA unless otherwise noted.