View source
watch 02:07
Spider-Man: No Way Home Trailer Dropped - The Loop
Do you like this video?
Play Sound

Created for Television By:
Steve Blackman
Developed By:
Jeremy Slater
Based on the Dark Horse Comic By:
Gerard Way and Gabriel Bá
Teleplay By:
Eric W. Philips

Jeremy Webb
"Changes" is the ninth episode of The Umbrella Academy. It aired on Netflix on February 15, 2019.

Vanya veers between shock and despair as she makes a string of unsettling discoveries. A serendipitous development leaves Five at loose ends.

At the age of four, Vanya Hargreeves is proving particularly troublesome, not wanting to eat her oatmeal. The nannies hired by Sir Reginald cannot make her eat, and she proceeds to kill each one with her powers. The last nanny, Grace, is introduced. When Vanya's powers throw her across the room, Grace is unfazed and gets back up, despite having her head knocked 180 degrees around. Seeing this, Vanya gets scared and begins eating her oatmeal.

At Leonard's home, Leonard tries to convince Vanya that they need to escape because her family will be coming after her for killing Allison Hargreeves. Vanya cannot comprehend what she did, knowing she lost control but hoping that if she explains what happened they will help her. Leonard tells her that he is the only one on her side and tells her that she is special.

Luther, Diego, Klaus and Five rush Allison to the Academy to save her life. Grace examines her, diagnosing a severe laceration to the larynx and that one of them will need to give blood. All the brothers volunteer, but Luther's new physique makes him incompatible, and Klaus' blood is polluted. Diego is the obvious choice but faints at the sight of the needle. Pogo tells Grace to stick him anyway.

With this new blow, Klaus begins looking for drugs since he wants to be numb. No one is taking him seriously despite being sober and he still can't talk to the person he loves. Ben tries to talk him out of it but when Klaus puts the pills in his mouth, Ben goes to punch him. To both of their surprise, Ben's fist connects with Klaus and makes him spit the drugs out. They are both shocked; Klaus thinks Ben did it on his own, but Ben is sure that Klaus made the connection real.

Diego and Five plan to go after Leonard, believing that he was the one that tried to kill Allison, and they take Klaus with them. Leonard tries to convince Vanya to leave with him, but she knocks over a bag and finds Sir Reginald's journal. Realizing that Leonard manipulated her, Vanya tries to get away from him. Leonard tries to convince her to stay, telling her that he loves her and believes in her and that he was the reason Vanya got first chair. Knowing the truth, Vanya realizes that she loves her family and needs them right now. Leonard tells her that her father was right about her all along, that she was too weak and pathetic to control her own powers. Vanya's powers flare and she kills Leonard with multiple flying sharp objects.

At the motel, Agnes hears sounds inside and believes that Hazel has returned. Instead she finds that Cha Cha has come looking for her.

Diego, Klaus and Five arrive at Leonard's house to find it in chaos. Vanya is not present, but they find Leonard's body and Five puts the false eye into Leonard's empty eye socket. Knowing that Harold Jenkins is now dead, Five believes that they have stopped the Apocalypse.

Luther watches over Allison, asking Grace if she will live. Grace is sure she will but Allison's vocal chords were damaged and she is not sure if she will be able to talk again. Diego, Klaus and Five return home looking for Vanya, believing that if she was in trouble she would return to the Academy. With the apocalypse seemingly averted, Diego decides to continue his hunt for Hazel and Cha Cha, while Klaus questions Five about how he controls his powers since he is focusing on what their father said about barely scratching the surface of his potential. As they talk, Klaus realizes that Five is also an addict since he obsesses about the apocalypse. Without it as a guiding force in his life, Five is lost.

Hazel arrives at the Academy and starts talking with Five, but they are interrupted by Diego. Five knocks out Diego so he can continue speaking with Hazel. Hazel tells him that he quit the Commission and is volunteering to stop the apocalypse. Five tells him they already succeeded. They talk about the future and new beginnings, and Five asks who pulled the trigger on Detective Patch. Hazel tells him it was Cha Cha. Five is dejected because if it was Hazel, his gun could have been used to clear Diego's name in her murder. Hazel produces both his and Cha Cha's gun and hands them over, telling Five he is done with the life.

In her apartment, Vanya listens to her phone messages. The last one is from Allison, apologizing and tell Vanya that she loves her. Vanya breaks down crying at hearing her sister's voice.

Allison wakes up, unable to talk. Luther gives her a notepad and she writes down "Vanya. Powers." Luther does not understand, but Pogo does and reveals their father's last secret.

Diego wakes up to find Hazel gone. Five tells him that Cha Cha killed Patch and Hazel gave them the evidence to clear Diego. Diego doesn't care, blaming them both since they were both there that night. Five questions what Diego liked about Patch and he replies that she saw the good in people. Five points out that she would not be proud to know that Diego killed to honor her memory.

Vanya arrives at the Academy to find Luther waiting for her. She is told that Allison survived and breaks down, telling Luther she didn't mean to hurt her. Luther understands and hugs her close, taking her breath away and knocking her out. When Vanya comes to, she is locked in the secret soundproof vault under the Academy.

Outside, Luther tells Klaus and Diego about Vanya's powers. They want to let her out because they need to help her, not confine her. Even Allison wants Luther to let her out but he stands firm in his decision. As Vanya screams that she is sorry, she is left alone in the vault.

Hazel arrives at the motel to find that Cha Cha has Agnes suspended in a death trap. The two fight, and during the commotion, Agnes starts to fall to her death. At that moment, time freezes and The Handler walks in. Her face is scarred and she tells Hazel and Cha Cha that they have screwed things up.

Five enters the department store and puts Delores back on her stand. He says his goodbyes to her and leaves, asking one of the clerks to get her something new to wear.

In the vault, Vanya's reflection becomes her child self and encourages her to embrace everything they are since she should not live the rest of her life in a cage. In the sound proof room, Vanya harnesses the power of her own heartbeat to break out. Above in the Academy, creaks and crashes are heard and her siblings realize that Vanya is breaking free. 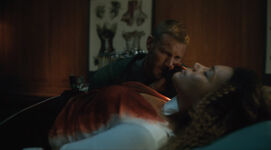 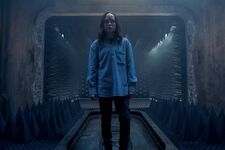