This article is about Allison Hargreeves from the Netflix series. You may be looking for the Rumor from the Dark Horse comics.

Influencing reality and the minds of others by lying

"When something seems too good to be true, it's usually anything but."
—Allison Hargreeves[src]

Allison Hargreeves, originally designated as Number Three, is one of the forty-three children born on the 12th hour of the first day of October 1989 to mothers without any previous signs of pregnancy. She was one of seven adopted as a baby by Sir Reginald Hargreeves whose intention was training them to save the world. Ranked by their individual usefulness, Allison was Hargreeves' Number Three with the ability to influence events by prefacing any statement with "I heard a rumor."

After Five fails to prevent the apocalypse half caused by Vanya , she finds herself in Dallas, 1961 during the height of the American Civil Rights Movement. Separated from her siblings and coping with the loss of her voice, Allison navigates a segregated and racist southern society.

Allison is played by Emmy Raver-Lampman in the Netflix adaptation of The Umbrella Academy.

Allison Hargreeves is one of forty-three children born simultaneously to mothers with no previous signs of pregnancy on the twelfth hour of October 1st, 1989. She is adopted by Sir Reginald Hargreeves and designated as his "Number Three." Her father treated her more as an experiment than a person. She started training, once she was old enough to wobble. As a child, she was used by her father for her powers. He forced her to use her ability to make Vanya forget she also had powers and placed a psychological block on her mind that made her believe she was only normal. The other students were told that Vanya was sick and in isolation. Sir Reginald took Allison to see her and told her to say "I heard a rumor you think you're just ordinary."

Soon, about five years after the run-in with the compelled Vanya, Allison and the others make their first public appearance at a local bank. Whilst the thieves line up the hostages, Allison strolls into the bank casually. One robber, however, notices her demeanor and tells her to line up with the others. Whilst he shouts at her, she whispers into his ear "I heard a rumor, that you shot your friend in the foot." Due to her ability, the robber obeys her order. Soon after most of the robbers are subdued, her and the others watch as Ben annihilates the remaining robbers. Sir Reginald introduces the world to the inaugural class of the Umbrella Academy, but only mentions that he adopted six children, rather than seven. Later throughout the week, Allison exits a limousine outside of her home. He and his siblings are intruded on by Harold Jenkins, cosplaying their outfits. Leonard attempts to console with Reginald, divulging that he was born on the same day as Allison, and would like to ally with the Umbrella Academy. Allison watches as Reginald mortifies and drags out Harold in front of a crowd. But her and the others brush the occurrence away and return to their normal lives. The members, including Allison, of the Academy train, and Sir Reginald monitors their sleep daily. All of the children, except for Vanya, are given umbrella tattoos on their wrists. Soon after, Luther and Allison sneak out of their rooms at night and meet in a secluded section of the Academy. They have snacks, and Luther gives Allison a locket with A+L inscribed on it. Allison asks Luther to dance with her, but they are caught by Sir Reginald who forbids them from ever coming to the room again.

Almost ten years later, the academy is estranged and the members, including Allison, go their seperate ways to strive on their own paths. Prior to the series, she married Patrick, on whom it is implied she used her powers to initiate their relationship: 'I heard a rumor that you love me'. She has a daughter named Claire with Patrick.Her marriage broke down after Patrick witnessed Allison using her powers on their daughter, after which he gained full custody of Claire. After the divorce, as well as being hired for several movies, Allison acquires Vanya's Autobiography Extra-Ordinary: My Life as Number Seven and is horrified by the pages within.

Return To The Academy

During her time in the spotlight at a Red-Carpet Event, one reporter inquires Allison about her fathers death. Allison is startled by this comment and informed by a security guard of his death as well. Startled and heartbroken, Allison leaves the event. The remaining members of the Hargreeves family converge on the Academy in the wake of their father's death. The reunion is fraught with tension. While Allison and Pogo are pleased to see Vanya, Diego is not since she wrote a tell-all autobiography about her childhood. At the Academy, Luther goes into his childhood room and puts on some music. As the music plays, each member of the Hargreeves family begins to dance in private, showing that although they are vastly different people, there is an underlying connection between them. The dancing is interrupted by a lightning storm. Heading into the courtyard, they watch as Number Five re-appears through a temporal anomaly.

Number Five tells them about his trip to the future and his return, revealing he is really a 58-year man trapped in his 13-year old body. The Hargreeves, Pogo, and Grace hold a funeral for Sir Reginald in the Academy's courtyard. The proceedings are fraught, leading to Luther and Diego coming to blows. During the fight, Ben's memorial statue is destroyed and Diego cuts Luther's arm with a knife, causing him to hide the wound and leave. At the Academy, Luther struggles to adapt to a routine on Earth after being on the Moon for four years. He talks with Allison who tells him that she told her daughter Claire all about her superhero uncle who lives on the Moon. Allison talks with Patrick on the phone and conversation becomes heated. Vanya tries to comfort her sister but says the wrong thing, implying that the best place for her is away from her daughter. Allison gets angry with Vanya and tells her that she cannot blame all her problems on their father now that she's an adult.

Pogo seeks out Allison to make sure she's alright, having been alerted when Vanya called to check up on her. Allison admits she said some rude things to Vanya. Pogo shows her some old security footage of when they were children, admitting that he spends a lot of time in there. He gives Allison the keys so she can watch the videos by herself. Choosing one on the shelf, Allison watches it and finds something unexpected on the tape. At the Academy, Allison shows Luther the surveillance tape that appears to show Grace being responsible for Sir Reginald's death. After she brings him tea, he collapses and Grace leaves the room. Confused by what they're seeing, they decide to confront Grace. They question her in the kitchen, but she deflects their answers, telling them that she does not recall some of the events from the night Sir Reginald died. They ask Grace if she was ever angry with their father, and she tells them he was a kind man who was very good to her. Luther and Allison discuss Grace's possible involvement in their father's death, and the conversation soon turns to Allison's family. Luther finds out that the reason Patrick won custody is that Allison used her power on Claire. As a result, Allison has to attend counseling sessions before being allowed visitation rights.

When Five transports all of the Umbrella Academy back in time to avert the apocalypse, Allison finds herself in Dallas, 1961, at the height of the American Civil Rights Movement. She quickly stumbles upon Odessa's salon, where she begins working shortly after.

Allison initially enjoys a close and stable relationship with Raymond, who she met during her time at the civil rights movement. Things begin to go south for the two when other members of the Umbrella Academy, particularly Luther begin showing up in Dallas.

Raymond becomes confused over Allison's history and, when she is reluctant to explain, he leaves their house together and refuses to talk with her. As a result, Allison realises that her only chance to salvage the relationship with Raymond is to explain about her past and her involvement with the Umbrella Academy. Raymond is initially reluctant to believe her, but when she shows him her abilities, he believes her.

Their relationship comes to a head when Allison is ready to return to her rightful place within the timeline with the other members of the Umbrella Academy. Allison asks Raymond to return with her, but he is reluctant, citing that 2019 is not like 1963, and his duties are not finished. Nonetheless, Raymond tells her that the years they spent together have been the best of his life.[3]

Allison is a determined woman with a kind heart and strong values. She has displayed her kind-heartedness on many occasions, particularly with her sister Vanya. She welcomed Vanya home, despite the book she wrote and even stated that she was glad Vanya had come.

Allison is a thoughtful and reflective person, particularly since losing custody of her daughter. After being caught using her powers on her daughter, she seemed to swear off using it, refusing to do it even during a confrontation with Cha-Cha, a highly skilled assassin. She puts a lot of energy into her own personal growth and relationships, although she sometimes reverts to old patterns around her siblings.

Allison seemed to abuse her power of suggestion in her childhood and as a young adult, using it to advance her career, manipulate those around her, and even force someone to love her. This shows a deep insecurity in her, and her actions seem to haunt her consistently. She is strongly against using her power, even when her life is endangered. As seen where she shed tears when Vanya began to lose control, begging her not to make her use her power.

Despite everything, Allison has a deep love for her siblings. She goes especially out of her way to show love toward Vanya, seemingly as a way to make up for the cruel way she treated her as a child. She even forgives Vanya instantly after she almost kills her, and smiles warmly at her during her concert. 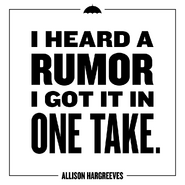 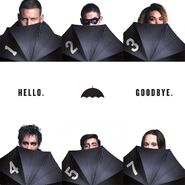