Robin Atkin Downes (voice)
Courtenay Stevens (on-set performance)[1]
Atlas Jericho "A.J." Carmichael is an Shubunkin goldfish inside a robotic body. He was the heads of the Temps Commission Board of Directors.

He informed the Handler of her demotion following her failures with her latest assignment involving Hazel and Cha Cha. Dissatisfied with the decision, the Handler arranged for Five to kill the Board of Directors for her to take control of the Commission for herself. Carmichael was spared, even if taken out of his robotic body.

Having accomplished this, Five delivered Carmichael to the Handler. He was kept in a fish bowl on the Handler's desk. On one occasion Carmichael managed to pass on a message to Herb to find a file labelled '743' which was on the murder of the parents of the Handler's adoptive daughter Lila to turn her against her. His plan backfired as the Handler had forged his authorisation to carry out the assassination, which she used to her advantage to keep Lila on her side. Realizing that Carmichael was involved with Lila getting the document, the Handler scooped Carmichael out of his fish bowl, and swallowed him whole. 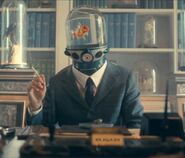 AJ Carmichael sat at his desk in Commission headquarters.

Community content is available under CC-BY-SA unless otherwise noted.